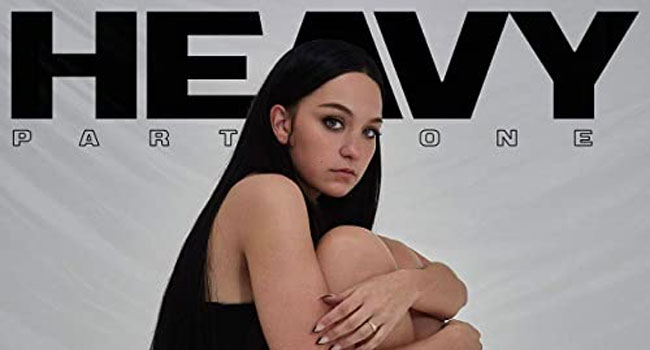 Australia’s princess of dark pop CXLOE has fed the hungry belly of fans globally by revealing details of her debut body of work. Titled Heavy, Pt. 1, the six track EP will be released on Friday, October 16th via Sandlot Records/AWAL. To commemorate the news, CXLOE has shared the title track of the EP “Heavy,” alongside a visual accompaniment.

With a total of ten singles resting in her bow, the moment for a full body of work has finally arrived. Heavy, Pt. 1 sees CXLOE defined as an artist by the establishment of a dual experience – for both herself and the listener. Adopting two distinct personas – CXLOE and Chloe – she offers herself acceptance and permission to be complex and multifaceted, with a hope that others feel inspired to do the same. Across Heavy, Pt. 1, CXLOE is characterized by darkness, complexity, depth, sharpness and extremes while Chloe is warm, organic, vulnerable, wholesome, and stripped-back – both definingly her!

“For a long time I struggled with the two sides – I thought I had to choose one way or the other,” she explains. ”But as I’ve grown as a person and an artist, and in the process of creating my music and this EP, I’ve realized that both sides wouldn’t function without the other.” By juxtaposing the very different, often opposing sides of herself against and beside one another, the listener is invited to be absorbed into CXLOE, Chloe or to dance somewhere between the two. Underlying this definition hums a constant, gentle reminder and invitation to be perfectly okay with exactly who we are, as we are – even if it differs day to day.

On Heavy, Pt. 1 ,CXLOE has teamed up with co-writers Michael Pollack, The Futuristics, Trey Campbell, Kito, Casey Smith, Boyboy to name a few, and has enlisted Andrew Wells across production (Halsey, Bebe Rexha) with Michael Freeman adding mixing finesse to the final product. The result is a remarkable debut offering, rich in personal experience and acceptance. Sonically, the EP progresses the dark-pop sound CXLOE has become synonymous for. As CXLOE interprets “it’s dance-cry music”.

Speaking to “Heavy,” the title track, CXLOE explains,“‘Heavy’ is all about the feeling I feel most days. The song talks about a relationship that was once light and full of love but now carries too much weight to handle. I feel this extreme switch with a lot of things in my life and most of the time it’s self-sabotage. Another beautiful trait of mine.”‘Heavy’ is joined by five further impressive tracks on Heavy, Pt. 1.

Setting souls alite in July this year, CXLOE revealed “12 Steps,” a single that sees CXLOE step up to the plate to attack the inhibitive and often taboo subject of addiction. A subject achingly close to her own heart, CXLOE pledged her first week of single sales to Lifeline with a statement reading, “Addiction needs to be spoken about and not treated as a taboo topic. This song has been written from my experiences and I have the utmost respect for those battling addiction and thank those strong people in my life for letting me shine light on these topics.” “12 Steps” was co-written with Michael Pollack (Charli XCX) and enlisted the production prowess of Andrew Wells (Bebe Rexha) and The Futuristics (Selena Gomez).‘12 Steps’ has since surpassed 1 million streams.

Following steadily behind came “One and Lonely” which deals with the loneliness of being away from the one you love. “I spend a majority of the year away from my partner, and it always weighs on me heavily. This song talks about the endless flights and sleepless nights away from each other and how heavy this feeling is,” CXLOE explains. Co-writing credits go to Trey Campbell, Sam McCarthy and Jessica Porfiri and with of Sam McCarthy [Kids of 88 and Goodnight Nurse] production prowess enlisted.

Rounding out Heavy, Pt. 1 are “Swing”, which touches on ever-changing emotions and how they can swing like a pendulum; “Plans”, about having no plans, finding your soulmate and discovering comfort and contentment in doing nothing together, and ‘Creature’ – a song about how inherently animalistic we are and how hard it is to fight habits that make us feel whole.

Since her debut single “Tough Love” in 2017, CXLOE has delighted fans, media and tastemakers across ten singles including “Low Blow”, “I Can’t Have Nice Things”, “SICK”, “Show You” and a collaborative single in August this year with US production lords Cheat Codes on “Between Our Hearts”. She boasts writing credits with the likes of Andrew Wells (Bebe Rexha), Sam Farrar (Maroon 5), The Futuristics (Selena Gomez), MAG (Bebe Rehxa, Zara Larsson, Astrid S), BOYBOY, Louis Schoorl (5SOS, Charlotte Lawrence), Justin Tranter (Julia Michaels) and Ross Golan (Ariana Grande) to name but a few.

To date, CXLOE has amassed more than 35 million streams, five million of which come directly from the USA, and received enviable international attention across countless global playlists including 49 global New Music Fridays on Spotify and covers of Front Left on Spotify and The A-List Pop and Future Hits on Apple Music to name but a few. Support and critical acclaim has seen CXLOE receive airplay and coverage from triple j, all pop-leaning commercial radio stations across Australia and across global titles such as Billboard, CLASH, The Line Of Best Fit, LADYGUNN, V Magazine, Refinery29, VOGUE Australia, and countless more.