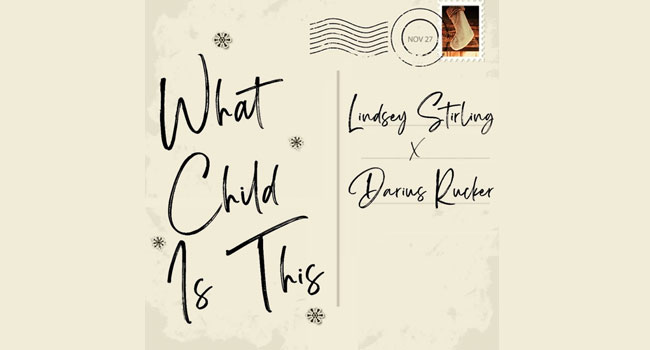 Three-time GRAMMY winner and recent CMA Awards host Darius Rucker has teamed up with platinum-selling electronic artist and violinist Lindsey Stirling for a special performance of the classic Christmas carol “What Child Is This” for this year’s CMA Country Christmas television special, airing Monday, November 30th at 9 pm ET/PT on ABC. The two superstars have also released the duet to all DSPs ahead of the performance.

“I was so honored when the CMA asked me to perform ‘What Child Is This’ and to be getting to do it with an amazing musician like Lindsey is just awesome,” notes Rucker, who also recently co-hosted the 54th annual CMA Awards and performed alongside Katy Perry on this past weekend’s American Music Awards.

“I was so excited to be a part of CMA Country Christmas again this year,” adds Stirling. “Every year, they give me an amazing chance to sparkle in their spectacular show. This year was extra special since I got to collaborate with the amazing Darius Rucker. Hope everyone loves it as much as we do!”

Rucker also recently released an original holiday song with his Hootie & the Blowfish bandmates and talented young songstress Abigail Hodges, with heartfelt track “Won’t Be Home For Christmas” honoring the sacrifice of military members and their families, and his 2014 album Home For The Holidays remains in heavy rotation by fans and radio alike every holiday season. Meanwhile, his current feel-good single “Beers And Sunshine” is Top 15 and climbing at country radio.

Stirling previously released a solo, instrumental version of “What Child Is This” on her 2017 chart-topping holiday album Warmer In The Winter, the No. 1 new Christmas album of that year. Her live-streaming special Lindsey Stirling: Home for the Holidays airs on Saturday, December 12th, featuring a new dazzling Christmas show created exclusively for an at-home viewing experience. Tickets are on sale now.