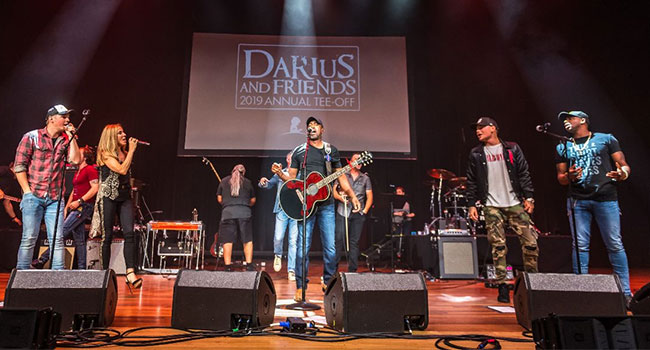 A decade after first visiting St. Jude Children’s Research Hospital where he was immediately inspired to pledge his support, Darius Rucker has surpassed the $2 million mark in his fundraising efforts with this year’s 10th annual Darius & Friends benefit concert on Monday night followed by his corresponding golf tournament and silent auction on Tuesday morning. This year’s event alone raised a record-setting $425,000+, bringing the all-time total to more than $2 million.

“I was struck on that first visit by how St. Jude not only cares for their patients, but also their patients’ families,” states Rucker. “They believe that a financial burden is the last thing a family should face when their focus needs to be on helping a kid get better, and St. Jude makes sure that their patients never pay a dime. It’s an honor for us to be able to help them continue such an important mission.”

The fundraising event has become an unofficial kickoff to CMA Fest over the years as fans descend on Music City for the week of festivities ahead. For its third year at the historic Ryman Auditorium, Rucker was joined by friends Jimmie Allen, Kane Brown, Luke Bryan, Sheryl Crow, Travis Denning and Brett Young as well as more than 2,400 fans at the sold-out show. In addition to the announced lineup, Darius & Friends has earned a reputation for its exciting surprise guests and the trend continued this year with Lady Antebellum’s Charles Kelley.

After a silent auction and live donation round, St. Jude patients Ian and Warner greeted the crowd with a magic trick that earned a standing ovation to kick off the night. Rucker then got the music rolling with chart-topper “Alright,” immediately bringing the packed Ryman house to its feet once again. He continued with his ninth No. 1 hit at country radio, “For the First Time,” before introducing newcomer Travis Denning who followed suit with current single “After A Few,” debut single “David Ashley Parker From Powder Springs” and his take on The Allman Brothers Band classic, “Ramblin’ Man,” with its double-guitar solo in the final bridge emitting cheers and leading into yet another standing ovation.

Next on stage was nine-time GRAMMY Award winner Sheryl Crow, greeting the crowd with a Minnie Pearl-esque, “How-dee” before launching into her popular version of the Cat Stevens classic “The First Cut is the Deepest” together with Rucker. Crow then spoke of St. Jude’s powerful impact, telling the story of a girl she met at the hospital in the early days of her career then saw again at a meet and greet about five years ago. “I remembered her – she was missing her prom and she was 13. She had a rare form of cancer. She was cured at St. Jude and she’s now in her 30s,” Crow explained, as the crowd cheered enthusiastically. “These are the stories that you guys make possible by showing up to these things… and just having the big hearts that you have, and of course we know that Darius has a big heart. Every time he calls I’m like ‘Yes. Where and when would you like me to be there?’” As the audience cheered, Crow continued her emotional performance with “Strong Enough” and gold-certified hit “Soak Up the Sun.”

Rucker then returned to the stage to perform “Radio” and “Hands on Me” before introducing Jimmie Allen for a performance of his three-week No. 1 debut single “Best Shot” and a cover of Matchbox Twenty’s “Unwell” which saw him leave the stage and dance throughout the pews of the Ryman floor to the delight of the audience. “Darius is one of the reasons I wanted to play music,” Allen shared, “so it’s pretty cool to be a part of Darius & Friends tonight.”

Four-time ACM and CMA Entertainer of the Year Luke Bryan took to the stage next with his latest single, “Knockin Boots,” followed by recent No. 1 “Most People Are Good” before getting everyone dancing along with his signature moves for 4x Platinum “That’s My Kind of Night.” Rucker then returned to the stage with hits “Homegrown Honey” and “Comeback Song,” before introducing Brett Young for performances of “Sleep Without You” and “Like I Loved You.” “I want to see some dancing in the Mother Church tonight,” Young proclaimed before launching into a cover of Marvin Gaye’s “Let’s Get It On.”

Kane Brown appeared next for the final announced set of the evening, performing “Short Skirt Weather” before earning a standing ovation for both his cover of Randy Travis’s “Three Wooden Crosses” and his recent No. 1 hit “Good As You.” The night didn’t end there though, as Charles Kelley made a surprise appearance to perform a powerful rendition of Prince’s “Purple Rain” alongside Rucker. “There are friends, and there are friends,” Rucker explained when bringing Kelley on stage. “This guy’s my brother.” Kelley returned the love, proclaiming to the crowd: “my favorite person in the entire world, Darius Rucker!”

The evening ended according to tradition, with Jimmie Allen, Kane Brown, Sheryl Crow and Travis Denning returning to the stage to join Rucker and the sold-out Ryman crowd for a “Wagon Wheel” singalong, the feel-good energy throughout the auditorium symbolic of the night as a whole.

This year’s milestone fundraising event adds yet another successful page to the decade-long history of “Darius & Friends.” Prior guests have included Lauren Alaina, Brooks & Dunn, Charles Kelley of Lady Antebellum, Ashley McBryde, A.J. McLean of the Backstreet Boys, Brad Paisley, Kenny Rogers and Paul Stanley of KISS, among many others.

Rucker, who has always prioritized philanthropic work, was honored with the ACM Gary Haber Lifting Lives Award last year for his efforts as well as the Harry Chapin Memorial Humanitarian Award at the recent 2019 Music Biz Awards. He continues this tradition of giving in the midst of the now-underway Hootie & the Blowfish Group Therapy Tour, the band’s first full outing in over a decade that comes with news of a forthcoming album with new label home UMG Nashville.