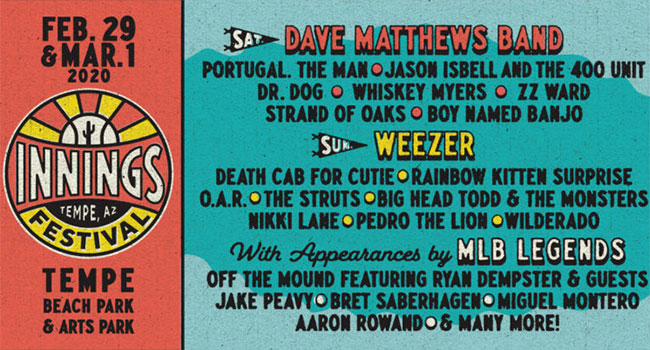 Dave Matthews Band and Weezer will headline the Third Annual Innings Festival, returning to Arizona’s Tempe Beach and Tempe Arts Park, February 29 – March 1, 2020. The two day event will feature 18 artists on two stages, including performances from Portugal. The Man, Death Cab for Cutie, Jason Isbell and the 400 Unit, Rainbow Kitten Surprise, O.A.R. and more, as well as curated food vendors and fun family activities. Fans can look forward to numerous appearances by Major League Baseball greats including Jake Peavy, Bret Saberhagen, Miguel Montero, Aaron Rowand and more, as well as the return of Off the Mound with Ryan Dempster, an on-site talk show featuring MLB players and musicians on the lineup. Tickets are available at inningsfestival.com.

One Day and 2 Day General Admission, VIP and Platinum Tickets are available. For fans looking to elevate their festival experience with additional perks, we’re introducing GA+, with both 2-Day and 1-Day Ticket options. GA+ includes access to our brand-new private retreat with shade and seating at the main stage, air-conditioned restrooms, a full-service bar with beer, wine and cocktails for purchase, and complimentary water and soft drinks.

Fans can also head to the website and sign up for the E-List to be the first to get new information.