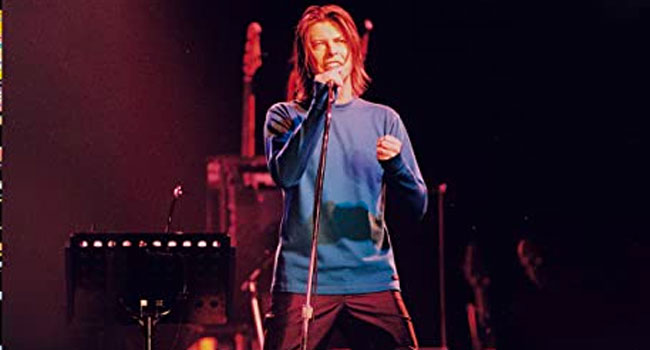 Something in the Air (Live Paris 99) available March 12th

Parlophone Records has set the fifth installment of David Bowie’s Brilliant Live Adventures series — from various 1990s era Bowie performances — for CD and 2 LP on March 12th. Something in the Air (Live Paris 99) features 15 tracks, including 12 previously unreleased recordings and three B-sides from the Hours album.

The Elysée Montmartre performance was one of only seven full shows promoting the Hours… album. For this special limited run of gigs, Bowie dug deep into his back catalogue making these shows particularly memorable. Standout tracks include “Can’t Help Thinking About Me,” first released in 1966 and not performed live in over 30 years, “Word On A Wing,” from Station To Station reinstated into the set after a 23-year absence, “Drive-In Saturday,” performed for the first time since 1974, and the Hours… track “Something In The Air” in its first live performance.

The concert was recorded live at the Elysée Montmartre on 14th October 1999. It was mixed by Mark Plati, and features Bowie backed by Page Hamilton on guitar, Gail Ann Dorsey on bass and vocals, Mark Plati on guitar, Sterling Campbell on drums, Mike Garson on piano/keyboards/synthesisers, and Emm Gryner and Holly Palmer on backing vocals.

The show date was a momentous one for Bowie, as that afternoon he was awarded the Commandeurs of the Ordre des Arts et des Lettres, the highest artistic honor that France can bestow.

The first three albums and the special limited edition boxes were released pre-Christmas with David Bowie LiveAndWell.com getting a January release. The final concert is set for sometime this year. All albums released in Brilliant Live Adventures are limited to single run pressings.