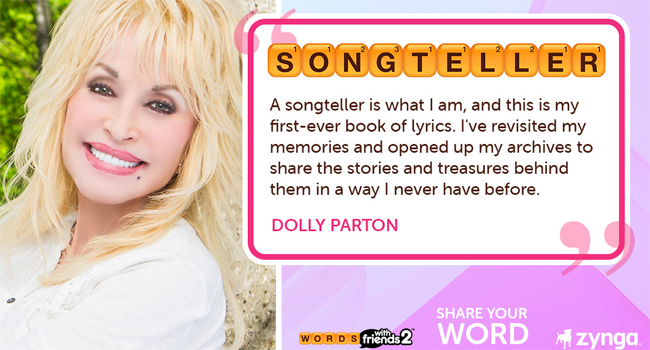 Zynga Inc., a global leader in interactive entertainment, has teamed with Dolly Parton for her own newly-coined word “Songteller” as the “Word Of The Day” for the hit mobile game Words With Friends. This specially crafted word, describing Parton’s record-breaking career in music and life as a lyricist, also happens to be the title of her new lyric book.

“Dolly Parton is more than a musician. She is a source of inspiration, joy and comfort for people around the world, of all ages, and from every walk of life,” states Bernard Kim, President of Publishing for Zynga. “While there is no one phrase that can define this one-of-a-kind icon, we’re honored to add Dolly’s own word, Songteller, to our dictionary to celebrate her illustrious, distinctive life.”

Players who enter the game on October 23rd can access a special video message from Dolly Parton explaining the meaning of “Songteller,” her specially coined description of her life and career in music.

In the game, fans will also be directed to Dolly Parton’s new Talk Shop Live channel where Parton will host a livestream at 6 pm ET on October 23rd, to share anecdotes from her life and memoir. Fans will have the opportunity to secure their copy of the book, which will officially launch on November 17th.

Parton is the most honored and revered female country singer-songwriter of all time. Achieving 25 RIAA-certified gold, platinum, and multi-platinum awards, she has had 26 songs reach No. 1 on the Billboard country charts, a record for a female artist. She has garnered ten Grammy Awards and 49 nominations, including the Lifetime Achievement Award and a 2020 win with For King & Country for their collaboration on “God Only Knows”; 10 Country Music Association Awards, including Entertainer of the Year; five Academy of Country Music Awards, also including a nod for Entertainer of the Year; four People’s Choice Awards; and three American Music Awards. In 1999, Parton was inducted as a member of the coveted Country Music Hall of Fame. Parton has donated over 143 million books to children around the world with her Imagination Library. Her children’s book, Coat of Many Colors, was dedicated to the Library of Congress to honor the Imagination Library’s 100 millionth book donation. From her “Coat of Many Colors” while working “9 to 5,” no dream is too big and no mountain too high for the country girl who turned the world into her stage.

Launching in 2009, Words With Friends has grown from popular mobile game to global pop culture sensation. Since these early days, the game has expanded to new platforms like Facebook Messenger, launched a hit sequel with Words With Friends 2, and brought innovative new ways to play to people around the world. The game’s success through this decade-long journey has been powered by player connections made through quick and clever wordplay that has become a touchstone in fans’ lives.