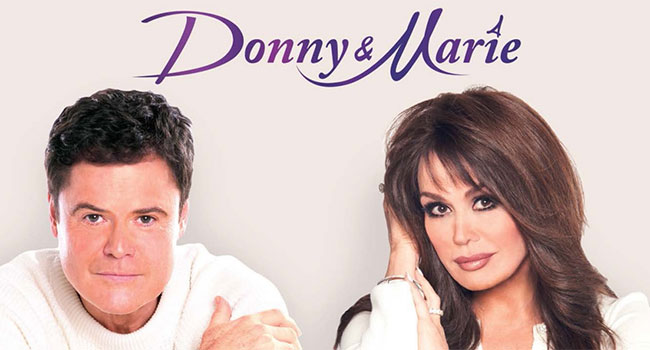 Donny and Marie will close their Las Vegas residency this November

Donny and Marie. Perhaps the only still-working duo whose first names alone evoke five decades of memories for their Baby Boomer fans. For that generation, as well as the generations that have followed, Donny and Marie have been the pinnacle of showbiz talent and pianche. And that is on full display in their residency show at the Flamingo Hotel in Las Vegas.

Opening the show atop a staircase, with background dancers dressed from head to toe in flashy sequins, Donny & Marie launch into a medley of peppy songs — old and new — including, “Tonight’s Gonna Be a Good Night,” “Love Shack,” and the Kim Weston/Marvin Gaye duet “It Takes Two.”

Then, it was time for Marie to kick off her first portion of the evening, singing a medley of 80’s and 90’s country songs, including her hit, “Paper Roses.” Her recent hit single, “Music is Medicine,” featured a video for the song shot in a children’s hospital. Marie has helped raise over five billion dollars as a founder of Children’s Miracle Network.

Marie’s voice is as pure as it was 40 years ago. Her bright and affable personality shines through in her interactions with audience, as well as her not-so-gentle ribbing of brother Donny. Marie’s ability to connect with fans has meant also meant decades of television success, and she will return to daytime when she takes Sara Gilbert’s spot at The Talk table this Fall.

Soon after Marie leaves the stage, Donny emerges singing “Puppy Love.” Somehow, this 61 year-old becomes a teenager again. You can see it in his eyes and, amazingly, hear it in his unchanged voice. The elder Osmond of the pair recently proved to the world once again why he is an entertainer of a lifetime.

Taking the stage as the Peacock on Fox’s breakout hit The Masked Singer, Donny showcased his commanding stage presence and impressive pipes while hidden behind a glitzy costume befitting a Vegas headliner. He came in second on the series.

The highlight of Donny’s set was his rendition of The Osmonds’ hit, “Crazy Horses.” Enhanced by fog and strobe lights, Donny belted his family’s biggest worldwide single with all the gusto of a new recording.

Another powerful moment, “Soldier of Love” felt like Michael Jackson’s “They Don’t Really Care About Us” mixed with the “bubblegum” (Donny’s words, not mine) love songs of his teen idol past. As mash-ups and medleys were a theme throughout the night, this Mulan fan would have loved to see “Soldier of Love” bleed into Donny’s biggest hit for all us classic Disney kids, “I’ll Make a Man Out of You.” Osmond, if you’re listening, try it!

Marie’s shining moments came during her second set, when she sang her Opera piece, showing off her vocal range. Then, she launched into a medley of songs from her numerous Broadway roles, including The King and I, and The Sound of Music.

If Donny is the better showman, Marie is the better vocalist. And this is the secret to their success. While they may pretend to have superior egos on stage, Donny and Marie know exactly what their own strengths are, and how to let each other shine. This is nowhere better on display than in their final segment together on stage.

While Marie is singing a Donny and Marie hit so beautifully, Donny has no qualms irreverently mocking the schlockiness of those older numbers! And little sis gets him back in good measure, interrupting Donny while he makes every effort to be “Mr. Showman.” It’s a great gag, and showcase their love for, and yes sibling rivalry with, each other. Donny and Marie are truly the all-American brother and sister.

As I was leaving the showroom, I heard some complain about the shortness of some of the songs. Marie only sang a few lines from “Paper Roses,” and medleys and mash-ups took precedence over full songs. I personally would have loved a Masked Singer medley.

But I think to criticize the format of the music is to miss the point. There show at the Flamingo is not meant to be Donny and Marie “In Concert.” To sit in the last remaining original Vegas showroom and watch these Osmond siblings is to watch a live variety show — a time capsule that is both present and past all at once. In that room, it’s 2019, but it’s also 1977. You’re watching a live taping of The Donny and Marie Show unfold right before your eyes. It’s never said as much, but that’s the world you’re pulled into. For 90 minutes in Las Vegas, Donny and Marie Osmond make time stand still.