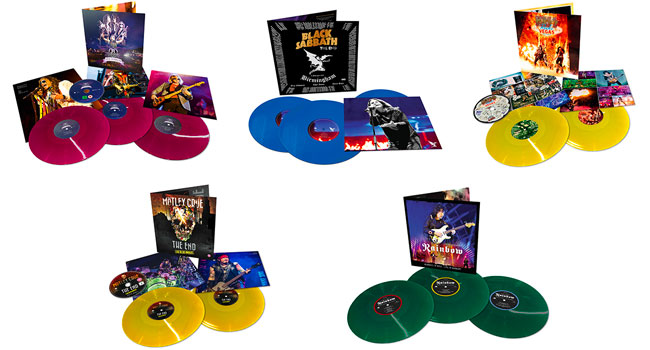 Eagle Rock Entertainment is set to release colored vinyl editions of some of rock’s most noteworthy live releases. Aerosmith’s Rocks Donington 2014, Mötley Crüe’s The End Live in Los Angeles, Ritchie Blackmore’s Rainbow’s Memories in Rock, Black Sabbath’s The End & Kiss’ Rock’s Vegas are set for special colored vinyl reissues this fall. Aerosmith, Motley Crue and Ritchie Blackmore’s Rainbow will be available on November 20th with Black Sabbath and KISS following December 11th. All five will be available through The Sound of Vinyl.

Aerosmith Rocks Donington 2014 will be available on limited edition 3 LP purple vinyl with a DVD of the show. The concert is a lasting document of the powerful and explosive bond that Steven Tyler, Joe Perry, Brad Whitford, Tom Hamilton and Joey Kramer have made with each other and with fans of rock ‘n’ roll everywhere. The film captures Aerosmith headlining the massive Download Festival at Donington Park with all their attitude and talent-drenched beauty as they deliver a blistering set of their greatest hits. It is a true once-in-a-lifetime rock ‘n’ roll experience to treasure and remember forever. The DVD features DTS Surround Sound, Dolby Digital 5.1 and Dolby audio.

Mötley Crüe’s The End Live in Los Angeles will be presented on limited edition double gatefold yellow vinyl with a DVD of the show including bonus features. Mötley Crüe took to the stage of the Staples Center in their home city of Los Angeles for their last ever live performance (so we thought) on December 31, 2015. It was the culmination of a farewell tour that travelled around the world taking in North and South America, Japan, Australia and New Zealand, Europe and the Middle East. The band had signed a legally binding “cessation of touring” contract that prevented them touring as Mötley Crüe beyond the end of 2015 and so this concert truly was “The End.” Being Mötley Crüe, they did of course go out in style with a spectacular light show and stage set, pyrotechnics, Tommy Lee’s incredible rollercoaster drum solo and a set list packed with Mötley Crüe classics.

Black Sabbath The End will be available as a limited edition 3 LP blue vinyl featuring the audio of the full length live show from Birmingham. Live show focuses on tracks from their Seventies albums and include “Black Sabbath,” “Paranoid,” “War Pigs,” “Iron Man,” “Fairies Wear Boots,” “Snowblind,” “Sabbath Bloody Sabbath,” “Children Of The Grave” and more.

KISS Rocks Vegas will be available a limited edition double yellow gatefold vinyl with a DVD. In November 2014, KISS brought their legendary live show to The Joint at the Hard Rock Hotel and Casino for a Las Vegas residency. KISS Rocks Vegas captures the event in all its pyrotechnical glory as the band power through hit after hit in front of the adoring KISS Army. Nobody delivers a live concert spectacle like KISS and this concert film finds them in peak form.