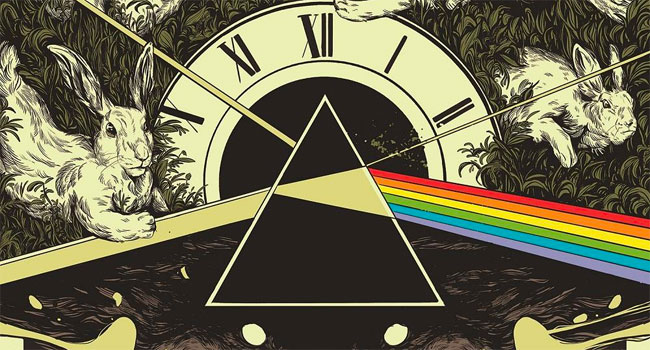 First in the series is a print by artist WolfSkullJack commemorating Pink Floyd’s performance from October 13, 1973, in Vienna, Austria. This print will be available starting Friday, February 19th starting at 2 pm EST / 11 am PST.

“My father introduced me to Pink Floyd when I was but a wee pup and Dark Side of the Moon was a regular on the record player. I am eternally thankful to have inherited his excellent music taste!” WolfSkullJack shares.

“When working for musicians I love to put on their music as I sketch and ink in an attempt to capture the band’s essence and I think that shines through here. The art is heavily influenced by Time and Breathe, two of my favorites, with reference to the lyrics, ‘Run, rabbit run’ in Breathe. Wolves in my work are often ethereal/celestial creatures who represent time and space. The wolf is represented as part of the natural life cycle of the rabbit in an all-natural way rather than something sinister.”

ECHO is also excited to present the Pink Floyd Print Series 2021 Subscription. Subscribers will receive exclusive Subscription Variants of all 12 prints in the 2021 series. These variants will be screen printed on creamy pearlescent gallery stock with a semi-metallic finish, and only available via this subscription. In addition to the six series prints, subscribers will get an additional (and exclusive!) seventh print, plus a host of other cool surprises shipped directly to their doorsteps in three separate shipments during 2021. Only 50 of the Subscription Sets are available.

The Pink Floyd series follows the release of David Bowie, which is available in four variants, and Jimi Hendrix, available in three variants. Other licensed print series include KISS, AC/DC, and more surprises to be announced along the way.