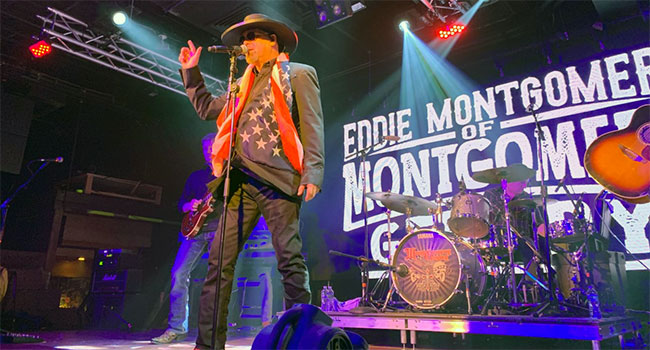 Taking the stage last night (Fri, March 6th) at Mulcahy’s on Long Island to a packed and raucous crowd, Eddie galloped through a 16 song setlist spanning his career as one half of country rock duo Montgomery Gentry.

More than two years after Troy (T-Roy) Gentry perished in a tragic helicopter accident, Eddie still tours under the Montgomery Gentry banner. However, there is a caveat. He is now billed as “Eddie Montgomery of Montgomery Gentry. ” As you can see in the logo below, his name above the headline is still smaller than the original band’s logo. It’s a compromise that shows how time–and people–needs to move on.

Eddie eschewed placing his name on the bill immediately after Troy’s passing. But two years on, that got uncomfortable for fans and band members alike. Choosing “of” now allows Eddie to front the show, while his backing band harmonizes on the parts formerly sung by Troy. Together, they still form Montgomery Gentry as a means to honor Troy’s legacy.

The other stand in for the late Gentry? The audience. In between his signature mic stand “helicopter” moves, Eddie shoved the mic in the crowds face, letting them sing the chorus on “Where I Come From,” “Hell Yeah,” and “Something to be Proud of.”

Eddie’s Gruff, whiskey-fueled vocals were best featured on “She Couldn’t Change Me,” “King of the World,” and “Drink Along Song.” The latter is still stuck in my head.

Eddie closed the main set with the Montgomery Gentry mega-hit “My Town,” followed by what he called “T-Roy’s favorite song,” “Gone.”

Here’s where I would like to pause and explain a little bit about the venue–which I absolutely loved and freaked out about on social media. Because of how it is set up, there is essentially no backstage. There’s a pathway from a door on one side of the stage to the stage itself that is roped off, but the area is entirely open. You can see them mic up the artists (which I personally think is kind of cool.) But it makes the conceit of encores…awkward. I can see you just standing in the doorway, guys…

Now that said, their guitarist provided a cool acoustic interlude that nearly justified the rest of the group leaving the stage. The guitarist’s musical moment included a tease of “If You Ever Stop Loving Me,” before the band returned to blast “Hillbilly Shoes.”

Eddie’s energy was off the charts. He’s known for his use of a microphone stand with a boom attached to it, and the various tricks putting the mic on a stick allows. He also yelled “Yah!” a lot, as if kicking a horse into high gear, and used a proud Kentucky redneck
phrase I’d never heard before: “Kick my mule.” Apparently it is a phrase that, roughly translated into Yankee, means “get a move on!” Montgomery is a country-bred cowboy, and the music is his mule.

Early on in the night, Eddie performed Montgomery Gentry’s Grammy-nominated “Lucky Man.” As he closed out that song, he looked to the heavens, and said “I’m a lucky, lucky, lucky man. Thank you, God.” It was the rawest moment of the night and was a rare glimpse into his soul.

Montgomery is a man who has suffered and survived incredible turmoil and loss in his life: a cancer diagnosis (he beat it), and the deaths of his son and his bandmate. But through it all, Montgomery has continued to see himself as a “Lucky Man.” He just wants to keep kicking his mule.