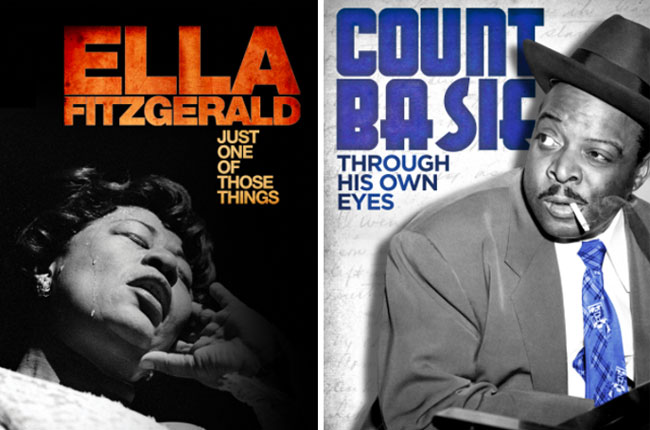 Eagle Vision brings both to digital outlets on Sept 11th

This fall, Eagle Rock Entertainment will celebrate the legacy of two jazz music icons, with the release of Ella Fitzgerald: Just One Of Those Things and Count Basie: Through His Own Eyes. These documentary films will be available exclusively on digital formats on September 11th.

Recently enjoying a hugely successful virtual cinema release, Ella Fitzgerald: Just One Of Those Things presents a deep, insightful look into the life of The “First Lady Of Song”. Directed by award-winning filmmaker Leslie Woodhead and produced by novelist Reggie Nadelson, the film combines never-before-seen footage with conversations with Smokey Robinson, Tony Bennett, Johnny Mathis, Itzhak Perlman, Norma Miller, the late Andre Previn, and a rare conversation with Ella Fitzgerald’s son, Ray Brown Jr. Ella Fitzgerald’s journey is thoroughly explored, from her youth as a kid on the streets of Harlem during the Great Depression, to her meteoric rise to renowned jazz singer, innovator, and international superstar against the odds of severe racism and sexism. Blackbook called it “completely absorbing…”, while Hollywood Reporter stated the film captures “Fitzgerald’s story with a sure feel for the joyous swing and sultry depths of that voice, and a sensitive eye on the complexities of life as a self-made Black woman in 20th century America.”

Known as the “King Of the Swing Kings,” legendary bandleader/pianist/composer Count Basie is revered for his musical achievements. The first African American to win a Grammy, he helped elevate jazz to a serious, respected art form in his 60+ year career, bringing it from clubs to concert halls. Count Basie: Through His Own Eyes unveils the man behind the music, as Basie tells his story in his own words. A revealing biography of this jazz pioneer, the film uncovers his inspirations and passions, as well as his private and family life. Director Jeremy Marre layers the film with a wealth of home movies and photo albums, underscoring Basie’s conversations of his relationship with wife Catherine (whose work in African American causes placed her at the side of Martin Luther King) and his protective, undying love for his daughter Diane, who was diagnosed with cerebral palsy. Featuring rare performances with Frank Sinatra, Billie Holiday, Sammy Davis Jr., and more, the film is a well-rounded lens, encapsulating both Count Basie’s legacy and his personal life.