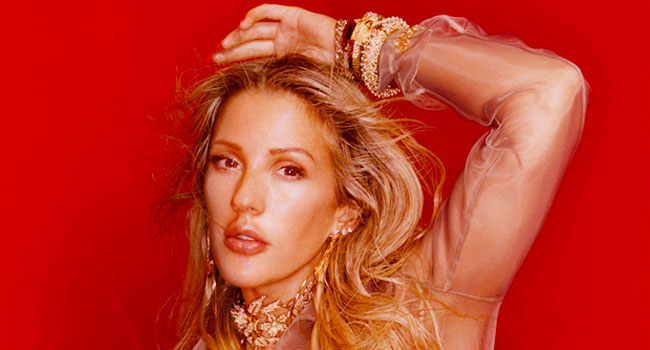 “I wanted to release this song off my upcoming album as a preview into the world my new album is in! ‘Power’ is about relationships in the 21st century, how they can now be dictated by social media, superficiality and material things,” Goulding shares of the track. “Dating can sometimes start out with lies or embellishments. The girl in the song is disillusioned by love and the cruel, good looking, self-obsessed people she keeps ending up with.”

Working with an all-female team, the music video for “Power” was filmed by Goulding in lockdown at her home in London. Creative directed over FaceTime by creative duo Imogen Snell Imogen Snell and Riccardo Castano of ISSTUDIO (Madonna, The XX) the video is undoubtably Ellie’s most personal yet; featuring montages of intimate selfie style videos layered with blurring shots of sensual aesthetics.

Tonight (May 21st), Ellie will be performing on NBC’s Red Nose Day Special, a star-studded telecast to raise money and awareness for children in need. She’s also been confirmed to perform on Good Morning America’s Summer Concert Series for the second year in a row. Other recent appearances include memorable performances on Jimmy Kimmel Live! and The Late Late Show With James Corden. Last month, Goulding was a featured performer on Global Citizen’s charity livestream, One World: Together At Home and just days later she took part in BBC’s Big Night In as part of a celebrity cover of the Foo Fighters’ “Times Like These,” which hit No. 1 in the UK and raised millions for Children in Need.

In a prolific and bold new artistic chapter, “Power” is Goulding’s latest offering in a string of notable tracks including “Hate Me” with Juice WRLD, her smash, “Close to Me,” with Diplo and Swae Lee, and her most recent single, “Worry About Me,” featuring blackbear.

Crowned Variety’s 2019 “Decade” Hitmaker celebrating her decade of hits, Goulding’s incredible career to date has seen her receive two GRAMMY Award nominations, a Golden Globe nomination, two BRIT Awards, sales of 17 million albums and over 128 million singles, and 20 billion streams worldwide. All three of her albums have been certified platinum in addition to her 19 RIAA certified singles. With over 50 million followers combined on her social platforms, she also earned YouTube’s Diamond Award, celebrating 10 million subscribers on her YouTube channel (and over five billion views globally). She also holds Billboard’s Hot 100 record for the most entries on the chart this century by a British female vocalist. A global ambassador for UN Environment, Ellie is also a noted campaigner and philanthropist speaking regularly on the climate emergency, and a patron of The Marylebone Project in London, focusing on fundraising to end homelessness.

Details of Goulding’s fourth studio album to be released soon.