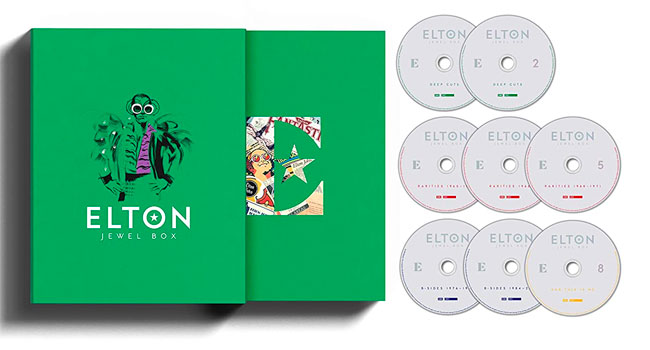 Sets are in-depth exploration of his extensive catalog

The ultimate exploration into John’s extensive back catalog, Elton: Jewel Box covers deep cuts, rarities from the earliest stages of his and Bernie Taupin’s musical journey, B-side spanning 30 years, and songs discussed in his best-selling, critically acclaimed 2019 memoir Me. The 8 CD box set of buried treasures comes in a beautiful hardcover book with the discs housed in the back, all wrapped in an outer slipcase. Each section comes accompanied by extensive notes, including a track-by-track commentary by John for Deep Cuts. A 4 LP gatefold black vinyl set of Deep Cuts that was curated by John himself, a 3 LP gatefold black vinyl set of rarities and B-side highlights, and a 2 LP gatefold black vinyl set And This Is Me…. All audio was mastered at Abbey Road Studios by GRAMMY-winning mastering engineer Sean Magee. With an unprecedented number of previously unheard and unreleased tracks painstakingly excavated from deep within the UMG archives, this is the ultimate treasure trove for Elton John fans.

As a first taster of some of the many gems gathered within Elton: Jewel Box, “Sing Me No Sad Songs” is available for the very first time. Previously unreleased, the track was written and recorded as a band demo in 1969. “Sing Me No Sad Songs” is a fascinating first taste of what was to come from John and lyricist Bernie Taupin, and one that mentions not one, but two, future smashes in its lyrics – “Sad Songs (Say So Much)” from 1984’s Breaking Hearts album and John’s first UK chart-topping single “Don’t Go Breaking My Heart” from 1976.

“To delve back through every period of my career in such detail for Jewel Box has been an absolute pleasure. Hearing these long lost tracks again, I find it hard to comprehend just how prolific Bernie and I were during the early days,” John says of the package. “The songs just poured out of us, and the band were just unbelievable in the studio. I always want to push forward with everything I do and look to the future, but having time during lockdown to take stock and pull these moments from my memory from each era has been a joy. As a devout record collector myself, this project has really excited me, and I couldn’t be happier with the level of craft involved in such a carefully curated, lovingly constructed box set. I’m sure my fans will enjoy it as much as I have.”

Discs one and two feature Deep Cuts, a selection of personal favorites, curated by John. The box set book includes a track-by-track commentary by John.

Discs three through five are called Rarities 1965 -1971, featuring John’s much sought-after 1960s and early 1970s demos and music that cemented the foundations of the iconic Elton John/Bernie Taupin writing partnership. The compelling, previously unreleased, missing piece in his illustrious career. Daryl Easlea narrates this fascinating story with contributions from those who were there at the time. These discs encompass 65 songs, all but a few of which have been stored in the vaults for more than 50 years. Most of these demos were recorded during sessions before John was signed to a recording contract or released his first album. Also included are the first song ever written by John and his debut appearance on a record (both “Come Back Baby” – 1965), John and Taupin’s first composition (“Scarecrow” – 1967), and newly-unearthed piano/vocal demos of some of John’s most acclaimed songs from his early albums. The packaging appropriately contains rare archival artwork and select original lyric sheets.

Discs six and seven contain B-Sides 1976-2005, non LP tracks and flip sides, never before compiled together. Thirty-six gems that are now given another chance to sparkle feature 17 previously only available on vinyl, resulting in all of John’s studio B-sides now being offered digitally for the first time in his career.

Disc eight is called And This Is Me… that coincides with the release of the updated paperback edition of Me. The final collection celebrates the songs mentioned by name by John in his acclaimed autobiography, closing Jewel Box with the 2020 Academy Award-winning duet with Taron Egerton, “(I’m Gonna) Love Me Again.”