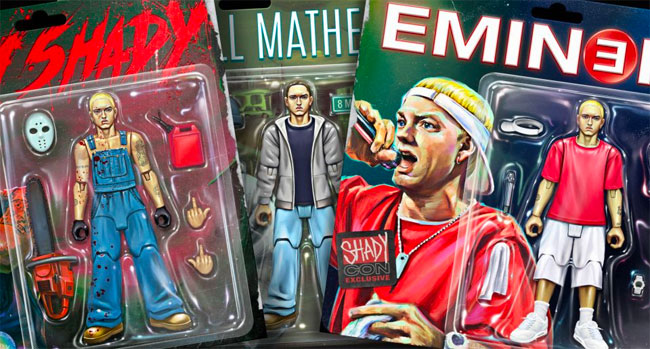 Eminem has announced that he will be dropping his first NFT (Non-Fungible Token) release this Sunday, April 26th at 6:30/7 pm ET on NFT marketplace Nifty Gateway. The drop, dubbed “Shady Con,” will feature a variety of Eminem-approved NFT collectibles.

In addition, the collection features original instrumental beats produced by Slim Shady himself specifically for this release. The tracks will be made available only as part of the limited edition and one-of-a-kind NFTs. A set of NFT action figures will also be available, but this only scratches the surface of what’s coming this weekend!

Eminem first teased the announcement on Tuesday, retweeting the recent Saturday Night Live sketch featuring Pete Davidson in character as Eminem from the “Without Me” video, which parodied the song in an attempt to explain what an NFT is.

“I’ve been collecting since I was a kid, everything from comic books to baseball cards to toys, as well as every rap album on cassette I could get my hands on,” the rapper shares. “Not much has changed for me as an adult…I’ve attempted to re-create some of those collections from that time in my life, and I know I’m not alone. I wanted to give this drop the same vibe of, ‘Oh, man I gotta get just that one or maybe even the whole set!’ It’s been a lot of fun coming up with ideas from my own collecting passion.”

“Shady Con” provides Stans, fans, NFT enthusiasts and collectors one opportunity to own a piece from this premier drop. Born from the convergence of blockchain technology, creative enthusiasm, and pandemic doldrums, this drop was inspired by Eminem’s passion as a vintage toy, comic book and trading card collector that traces back to his childhood days as just “plain old Marshall.” Make no mistake, this is a digital festival, but it’s modeled after the traditional “Con” gatherings where fans come together and trade their wares. You may not be able to get together with thousands of Stans in a poorly ventilated convention center somewhere on the outskirts of 8 Mile Rd., but this weekend you can rub elbows with each other on Nifty Gateway and own a piece of the collectible, non-fungible action!

“We’re thrilled to welcome Eminem to our platform,” shares Ashley Ramos, Senior Producer at Nifty Gateway. “Demand for NFTs continues to grow and we’re excited to bring this collaboration to our community and give them access to new artwork and music on Nifty Gateway’s marketplace.”

Nifty Gateway was created with the goal of opening the world to digital art and enabling both artists and brands to participate in this defining moment. Through the creation of unique, identifiable, and secure digital art on the blockchain, nifties have given authenticity to digital art — and with that provenance comes value. The company’s Nifty Marketplace is an all-in-one platform where you can buy, sell, and store NFT collectibles.

Over the course of his career, Eminem has sold over 130 million albums and 389 million singles worldwide. He was Nielsen SoundScan’s top-selling artist of the 2000s with 32.2 million albums sold in that decade in the U.S. alone. In addition, Eminem was also named Billboard’s Artist of the Decade for the same period, 2000 through 2009. Eminem has won 15 GRAMMY Awards and an Academy Award. His 2010 album, Recovery, was the first album in the U.S. to be certified platinum digitally. In March of 2021 his greatest hits album, Curtain Call: The Hits, became the first hip hop album to spend a full decade on the Billboard Top 200 albums chart. His most recent album, Music To Be Murdered By was released January 17, 2020 and was his ninth straight studio album to debut at No. 1 on the Billboard Top 200, selling over 279,000 units. Music To Be Murdered By – Side B is an expanded version of the album which was released in December 2020. Its release brought the album back to No. 3 on the Billboard Top 200, breaking a 50-year record for biggest chart leap.