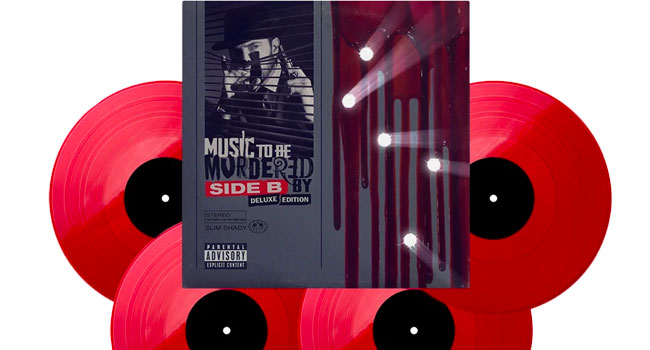 Eminem has surprised dropped his second album of 2020 with Music To Be Murdered By – Side B on Friday, December 18th. The new 16 album features appearances DJ Premier, Ty Dolla $ign and Sly Pyper. It was produced by the rapper and longtime collaborator, Dr. Dre. The Cole Bennett directed music video for “Gnat” is also available.

One of the most talked about tracks on the project is “Zeus.” In the track, Eminem offers an apology to Rihanna over a Chris Brown lyric that leaked last year in which he “sided” with Brown, who pled guilty to felony assault on Rihanna. Em and Ri both had a massive hit with “Love The Way You Lie” in 2010.

In January, Eminem dropped Music To Be Murdered By without any fanfare. That 20 track project includes collaborations with Ed Sheeran, Young M.A., Royce Da 5’9″, Juice WRLD, Anderson .Paak and others. This is his third surprise release that started with Kamikaze in 2018.

Side B is Slim Shady’s 12th studio album and was released by Shady Records/Aftermath/Interscope Records.