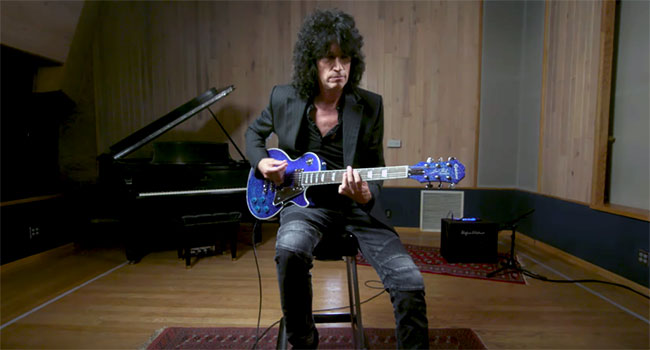 Tommy Thayer has been an Epiphone Signature Artist since 2014 and both his “White Lightning” Les Paul and Explorer were an instant success with fans and critics alike. The new Tommy Thayer Electric Blue Les Paul features a classic Les Paul profile made from Mahogany with a Maple cap and finished in Electric Blue — from custom paint designer John Douglas — with Les Paul Custom style white and black binding on the top. The Mahogany neck has a 60’s SlimTaper profile with an Indian Laurel fingerboard and standard Les Paul trapezoid inlays. The neck has a 24.75” scale, a 12” radius, 22 medium frets, and a 1.69” Graph Tech™ nut. The truss rod cover has a metal “bell” shape engraved with Tommy’s name and the back of the “dovewing” headstock features a “SpaceMan” logo and a reproduction of Tommy’s signature in silver.

“It’s really phenomenal what we’ve done so far as a team — working with Epiphone. We’ve had three really successful signature models in the last six years. As you know, the limited edition runs on the first three instruments — the “Spaceman” Les Paul and the “White Lightning” Les Paul and Explorer, quickly sold out. So, I’m really happy with that,” he tells Epiphone. “With the Electric Blue Les Paul, I wanted to stick to tradition with the design. I grew up with Gibsons — Les Pauls, Flying V’s, Explorers. That’s at the heart of what I really like. But also, I wanted to take those traditional guitars and make them my own. My goal is to always create something that looks and plays really well on the KISS stage. It’s gotta have some bling and have a certain look and an aesthetic that really stands out. And that’s certainly what we’ve achieved with this new Electric Blue Les Paul.”

KISS is on its End of the Road Tour, which is said to be their farewell trek, through 2021. Dates for 2020 have been announced with it culminating on July 17, 2021 in New York City.