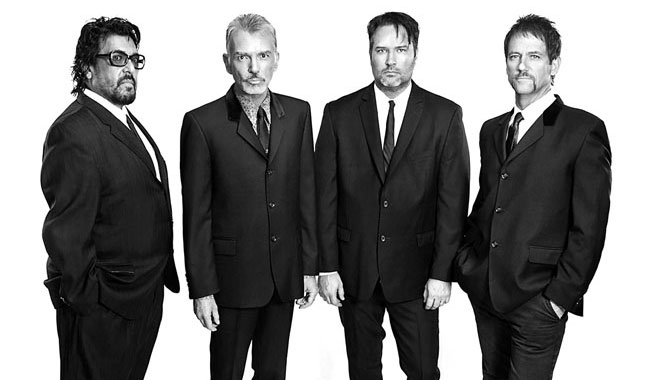 “We’re not going for hits.” The Boxmasters kick off 41 city tour in NYC on July 2nd

How does one describe the ever-evolving music of the Boxmasters? Part British Invasion, part Hillbilly, all Rock and Roll. Billy Bob Thornton, the Oscar-winning frontman of this group, say calls their early sound, “psycho-billy.”

The group was founded by Thornton and Grammy Award-winning engineer J.D. Andrew, and has been going strong for 12 years. “JD came in to work as an engineer on a solo record of mine called Beautiful Door,” said Thornton in a recent interview.

“During that process, I was asked to sing a Hank Williams song for a TV show. I knew JD played guitar. I said, ‘Hey, I gotta cut this song. We’re the only people here. Let’s just do this.’ And we cut the song, we liked the way it sounded.”

From there, the pair began discussing British Invasion music, and Thornton’s influence growing up in Arkansas. I said, “You ever heard of Chad and Jeremy?’ He said, ‘I think so.’ I played him ‘Yesterday’s Gone’ by them. And we cut a Hillbilly–or maybe you should call it psycho-billy–version of it. That was the first official Boxmasters song.”

It might be strange to hear Thornton, an Oscar winner for writing Sling Blade — which he also starred in and directed — talking about the British Invasion and cutting albums. But the truth is, music was a part of Billy’s life way before Hollywood came calling. He even briefly performed with Porter Wagoner’s band. After all his success in film and TV, Thornton loves coming back to music, his first passion.

Their philosophy is simple, “Just make your albums…for the reasons that you started doing it, as opposed to trying to get a business result.”

This philosophy extends to their live shows, where the evolution of the Boxmasters’ sound is evident in their setlist. J.D. says focuses on their more mainstream music. “It’s mostly songs from the last five years with a few older things thrown in there. But we typically don’t break into the first two records too much because the are so stylized and so different sounding that it can really derail the flow of a set.”

“[Our goal is] to breakthrough with the audience every night. We have a setlist, but if we have to break it up that’s what we’ll do.”

“We’ve had our blues brothers moments, where we’re playing at some club out in the country that we have no business at. The old proverbial Chicken Wire place, and all of a sudden we look at each other and go, We better play ‘I’ll Give You a Ring When You Give Me Back My Balls.’”

The tour kicks off July 2nd, and hits major metro areas along with some of those backwoods in equal measure. Fans can buy tickets at theboxmasters.com.

Such tongue-in-cheek music like “Balls” was an early hallmark of Boxmasters music. With their more recent album, The Boxmasters had the chance to get serious, and work with a British Invasion icon. 2019’s Speck was produced by legendary engineer, the late Geoff Emerick. Emerick is known for his work with the Beatles, including Sgt. Pepper.

Speck’s title is derived from the theme of the album: coming together for the greater good. Without being preachy, each song offers a message. For one, there is a song about homelessness. Billy says the band chose the title because, “We’re all just tiny specks in the universe trying to make a difference.”

Portions of this interview have been edited for clarity. For Matt’s full interview with The Boxmasters’ J.D. Andrew and Billy Bob Thornton, check out the latest Talk For Two episode!