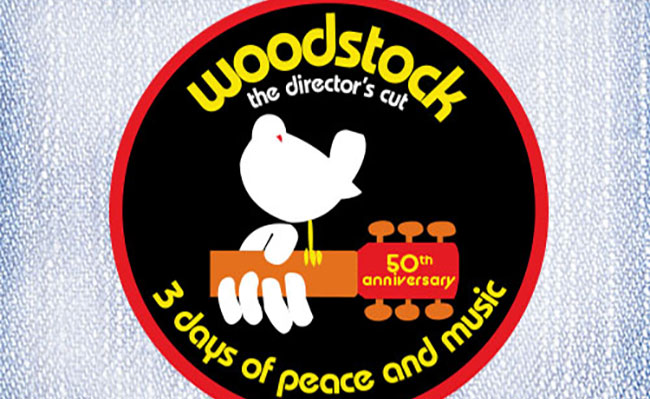 Before it happened, the rock-music festival on a dairy farm was billed as “An Aquarian Experience: 3 Days of Peace and Music” and no one realized the weekend would become one of the seminal moments not just in music history, but in American history.

Fifty years later, the groundbreaking film that captured the original Woodstock music festival has become one of the most acclaimed documentaries ever produced – and Fathom Events is partnering with Warner Bros. to bring it back to movie theaters for one night only. Woodstock: The Director’s Cut will play at 7 pm local time on Thursday, August 15th in movie theaters nationwide. Tickets are available at FathomEvents.com.

“Both as a documentary and as a pop-culture phenomenon, Woodstock is a milestone, a pivotal moment in history captured forever, proving the enduring power of cinema,” states Ray Nutt, CEO of Fathom Events. “Fifty years later, there has never been anything quite like it, either as a music festival or as a film, and Fathom Events is proud to be part of the anniversary of Woodstock.”

Directed by Michael Wadleigh and utilizing extraordinary perspectives, including split-screen and multi-screen sequences, Woodstock received an Academy Award for Best Editing for Thelma Schoonmaker, a longtime collaborator of Martin Scorsese, who is also credited (along with Stan Warnow, Yeu-Bun Yee, Jere Higgins and Wadleigh) as one of its editors. The movie features 30 musical performances, among them a five-song set by Jimi Hendrix (including “Purple Haze”); The Who; Janis Joplin; Crosby, Stills & Nash; Jefferson Airplane; and Joan Baez.

But apart from the raw, intimate ways it captures the performances, Woodstock also offers extraordinary insight into the people who attended the festival, the chaotic mood of the era, and the incendiary sparks let off by the event. Entertainment Weekly called Woodstock “the single greatest film ever made about the 1960s.”

The three hour, 44-minute director’s cut features performances – like Joplin’s and Jefferson Airplane’s – not seen in the original theatrical version, which was a box office smash when first released in March 1970. This one-night-only Fathom Events presentation is the first wide, national theatrical re-release of the film since its original run.