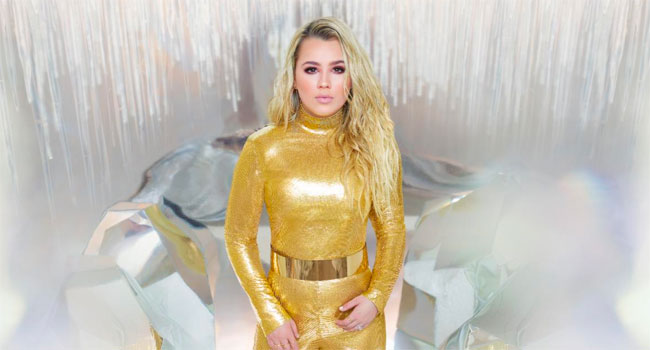 Hot on the heels of her historic debut No. 1 at country radio last week, Warner Music Nashville powerhouse Gabby Barrett continues to beam as she announces her debut album Goldmine is coming June 19th.

“I am so excited that my first album is finally complete,” shares Barrett. “I’ve been writing for this project for almost two years, pulling together who I am as an artist and working hard with my team to make this album an expression of that. To see it come together like this feels amazing and is such a huge blessing. I’m so excited for June 19 – can’t wait for you to hear it!”

Unveiling details for the highly anticipated LP, the newly minted chart-topper first revealed the track list with a little help from her fans. From all over the world, they texted Barrett and a lucky group of 13 superfans were chosen to each individually uncover the title of one track from Goldmine, piecing the puzzle together digitally through social media.

Spanning genres and styles, Goldmine showcases Barrett’s full-spectrum artistry, with cuts like “universally relatable” (ABC News Radio) pop-tinged reimagination of chart-topper “I Hope” featuring Charlie Puth, alongside newest release “Got Me” feat. Shane & Shane, a borderline gospel and spiritual ballad that delves into her most personal side.

Touting 12 songwriting credits on 13 songs and co-produced by GRAMMY-nominee Ross Copperman and Zach Kale, with additional production by Jimmy Robbins, Sam Martin and Bryan Fowler on select tracks, the project introduces Barrett as the true singer/songwriter she is.

The first-time ACM New Female Artist of the Year nominee’s debut single continues to impress this week, with “I Hope” reigning for the third consecutive week as the #1 streamed Country single in the U.S. overall while rising to #16 on the all-genre Billboard Hot 100 chart, staking her claim as “Country music’s rising star” (E!).