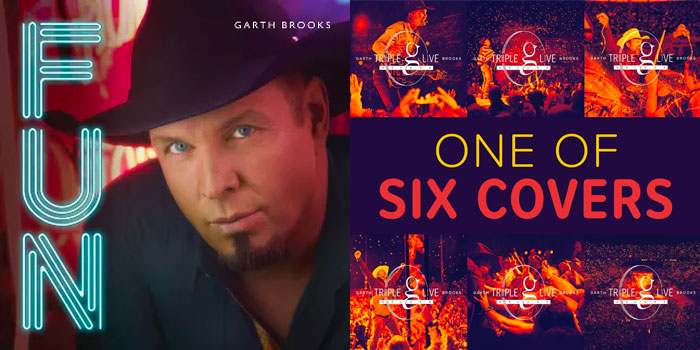 Both albums were delayed

Hot off the heels of receiving the Billboard Music Icon Award last week, Garth Brooks has announced the long-awaited release of two albums. His 12th studio album, FUN and live album Triple Live Deluxe will both be available on November 20th with pre-orders slated for this week. Both Amazon and Target mistakenly made the pre-orders live on Sunday (Oct 18th), before the official announcement. They were temporarily removed, but replaced later Monday. Target initially advertised “one of six covers” on its Triple Live artwork, but has since replaced it with “one of four covers,” leaving two for retailer exclusives.

Brooks posted a video on Monday (Oct 19th) inviting everyone to join him for a live interactive preview of the albums on his TalkShopLive channel on Wednesday (Oct 21st) at 7 pm ET/4 pm PT. There, fans can purchase each album separately and also bundled with his 2016 Christmas album with Trisha Yearwood, Christmas Together.

The album also includes a cover of the Lady Gaga/Bradley Cooper track “Shallow” with Trisha Yearwood, lead off single “All Day Long” and “Stronger Than Me.”

Due to fan demand in trying and difficult times, Brooks did a digital only release of seven of the album’s tracks exclusively on Amazon. There will be a standard release of the album but also a Limited Edition with a holographic foil cover.

Last year, when asked about FUN, Brooks said, “The title of the album was sparked because making it has been such a fun process to go through. Being able to go in and out of the studio while being on the tour, working with the same guys, it’s been amazing.”

Brooks’ first live record was his two disc album Double Live recorded during the 1996-1998 World Tour. It’s the No. 1 selling live album in history, with 21 million albums sold, certified by the RIAA. Now, Brooks is finally set to release his second live album, Triple Live Deluxe as a standalone version, featuring 30 tracks on 3 CDs with six different album covers containing photos from the road, including exclusive covers from Walmart and Talk Shop Live. All other retail outlets will offer the other four covers, but at random if purchased online. Fans will not get to pick the covers when purchased online.

The album covers the three and a half year record breaking Garth Brooks World Tour with Trisha Yearwood, but also now includes tracks from the record shattering Stadium Tour.

Triple Live was released as a free Fan Mix in August 2018 where fans could adjust the speaker or headphone settings, and sit in the middle of thousands of voices singing every word or right up on stage, hearing the concert the way the band does.

Triple Live also came as part of his Live Anthology later that year and made its vinyl debut in his massive Legacy collection last year.

Walmart will also be the exclusive retailer for No Fences, The Chase, In Pieces and Fresh Horses on standalone vinyl. The Original Analog recordings will be released outside of the Legacy set for the first time in November as well. Triple Live Deluxe will also be available on 3 LP via Walmart with two randomly chosen covers — The Entertainer for surpassing six million tickets on the 2014-2017 world tour and the Ryman show in which he launched his SiriusXM channel — when shipped. These covers were also part of the Legacy sets.