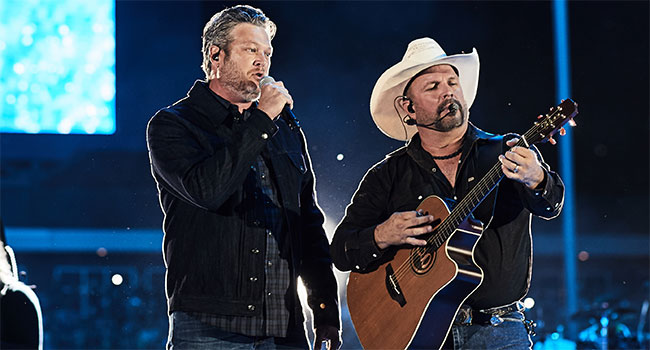 Current CMA Entertainer of the Year nominee and 12-time Entertainer of the Year Garth Brooks premiered his first music video in 12 years on Friday, November 1st and the video has already accumulated over 26 million views on Facebook in 72 hours. The video for his and Blake Shelton’s climbing single, “Dive Bar,” has the band taking a literal dive underwater for the “anthemic” (Billboard) track. The music video for “Dive Bar” is available to watch below.

In March, Brooks launched the monumental The Stadium Tour. In the first nine stadiums announced, Brooks set massive ticket sale records, with many shows selling out in minutes and breaking attendance records. Brooks will continue the colossal tour at Knoxville, TN’s Neyland Stadium on Saturday, November 16th, marking the first concert at the stadium in sixteen years and one of only three concerts ever held at the stadium.

“Dive Bar” has inspired Brooks to launch the Dive Bar Tour where he plays seven dive bars throughout the country. The first five were at Joe’s on Weed Street in Chicago in July; Buck Owens’ Crystal Palace in Bakersfield, CA, in August; Gruene Hall in New Braunfels, TX in September; The Barn in Sanford, FL in October; and The Dusty Armadillo in Rootstown, OH in October. Brooks is set to announce the final two dates soon with the seventh one being announce tonight (Mon, Nov 4th) on his Facebook weekly live series, Inside Studio G.

Brooks has just made part of his catalog available on vinyl for the first time with his meticulously-curated vinyl package, Legacy, which was released on November 1st via Pearl Records. During the first pre-sale, Brooks smashed records with 20,000 packages sold in under 18 hours, totaling 420,000 vinyl records. Forbes noted, “To put this in context, The Beatles were the number-one vinyl artist in 2018 with 321,000 sales over 12 months.” Earlier this year, Brooks received iHeartRadio’s inaugural Artist of the Decade Award at the iHeartRadio Awards in Los Angeles.

Twelve-time “Entertainer Of The Year” Garth Brooks has been awarded the honor six times by CMA Awards as well as six times by the ACM Awards, a first for any artist. He is also the first artist in history to receive seven diamond awards for the now seven albums certified by the RIAA at over ten million album sales each and remains the No. 1-selling solo artist in U.S. history certified by the RIAA with over 148 million album sales. He has received every accolade the recording industry can bestow on an artist including being inducted into the International Songwriters Hall of Fame in New York, the Nashville Songwriters Hall of Fame, Country Music Hall of Fame and most recently, the Musicians Hall of Fame.