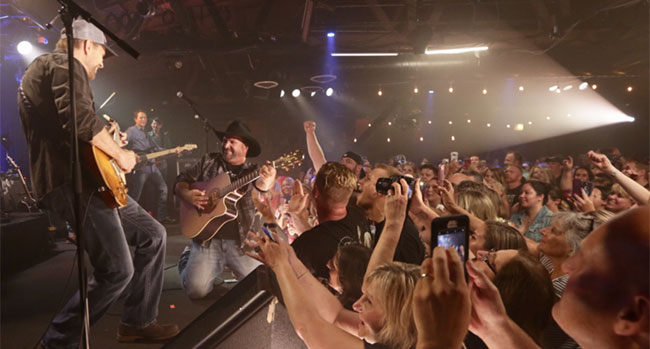 Garth Brooks rocked a packed house Monday night (July 16th) at his first Dive Bar Tour concert at Joe’s on Weed Street in Chicago. This was the first of seven concerts in support of his new single “Dive Bar” with Blake Shelton. The remaining six shows have yet to be announced.

Tickets for the concert were available to win exclusively from the Chicago country radio stations, US 99 and BIG 95.5. However, fans all across the country are able to see Brooks’ performance of “Dive Bar” on ABC’s Jimmy Kimmel Live!

Brooks went live on Facebook for a special Inside Studio G before the show to ask for suggestions for his next dive bar stop and then took fans along for the walk on stage with his band.

Brooks will announce the next stop on his Dive Bar Tour on the next Inside Studio G live on Facebook on July 22nd.

Even better news, the wait is over for fans eager to listen to “Dive Bar.” Already being called The Summertime Anthem, it’s now available exclusively on Amazon Music, where fans can stream it all day long.

“Dive Bar” is off Brooks’ upcoming album, Fun, which will be released soon. The day of it’s debut on country radio, “Dive Bar,” was the most added song with 135 total stations. Brooks and Shelton will be performing the song for the first time together live in Boise, ID on on Friday, July 19th on The Garth Brooks Stadium Tour.