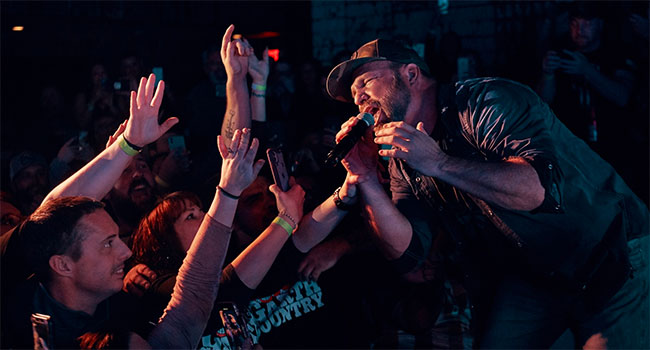 Garth Brooks roused the house at Six String in Foxborough, MA, for his seventh Dive Bar concert. The only way in was to win through local country radio, and the place was packed with over 900 people!

After the concert, Brooks went live on Inside Studio G, his weekly Facebook live series.

“People, what just went on was frickin’ awesome!” Brooks shares. “It’s just a great way to start the year. If everything in 2020 is like that, I’m fine, that’s the last gig I do in 2020. That was awesome. That was just fantastic!”

The first was at Joe’s on Weed Street in Chicago in July. The second was at Buck Owens’ Crystal Palace in Bakersfield, CA, in August. The third was at Gruene Hall in New Braunfels, TX in September. The fourth one was The Barn in Sanford, FL in October. The fifth stop was at The Dusty Armadillo in Rootstown, OH, also in October. The sixth concert will be at Prospectors in Mt. Laurel, NJ just outside of Philadelphia. Tonight’s show had originally been scheduled on the same night as the Prospectors show in December, but it had to be rescheduled due to the weather.

The Dive Bar Tour continues into 2020 and Brooks teases a possible return to St. Louis after opening The Stadium Tour there last spring. “We kicked the stadium tour off in St. Louis, right!? Well, St. Louis, after the next three years…” he says. “With dive bars, here we go. We get to go back to a market that’s fantastic for us. Now, I’m not announcing St. Louis, but if I was, I’d be saying it like this. I can’t announce it. I’m not the boss. Nobody let’s me announce anything… St. Louis!”

Brooks says more than 2,500 dive bars have been nominated by fans since last summer’s kickoff.

Last summer, Brooks joined Seagram’s 7 to declare it the summer of Dive Bars. As part of the celebration, the pair pledged to help make our roads safer for everyone by never driving impaired and have committed to securing 700,000 pledges over the summer from dive bar patrons across the country at jointhepact.com.

The Dive Bar Tour is inspired by Brooks’ latest single “Dive Bar” featuring Blake Shelton. The “rowdy” (Rolling Stone) and “anthemic” (Billboard) new song was the most added song at country radio upon its debut and is taken from Brooks’ forthcoming studio album Fun, and is his first musical collaboration with Shelton. Fun, which was set for release in 2019 has been pushed back to “early summer” 2020 as his first ever vinyl collection, Legacy, which was released on November 1st. The video for “Dive Bar” was released last week, amassing more than 26k views in 72 hours. The song is close to entering the Top 10 at country radio.

Brooks is also in the midst of his record-breaking, “turbo-charged” (Variety) three year stadium tour. This is the second year of the stadium tour. The trek will hit 10-12 cities per year for three years with most of the venues being college stadiums. In 2019, Garth Brooks The Stadium Tour averaged just over 83,000 tickets in each city and over 914,000 tickets sold to date.