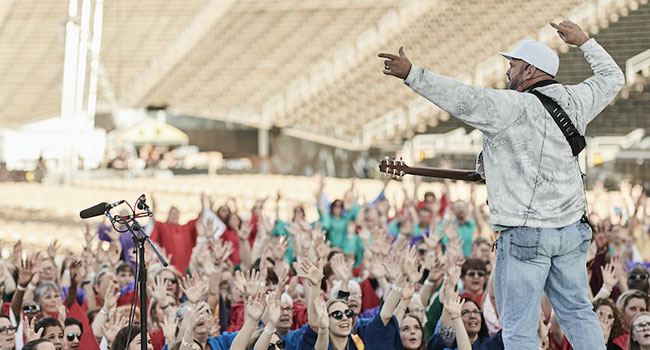 Brooks brought a stunning choir of 800 singers for two songs

Garth Brooks had a beautiful surprise for Autzen Stadium in Eugene, OR this past Saturday night, June 29th. It was a stunning choir of 800 singers. The choir made their entrance down the aisles of the floor and from high up on the concourse.

They joined Brooks for “We Shall Be Free” and the classic R&B song “Shout.” The choir was led by Brooks’ longtime singer and Oregon native, Robert Bailey. In the introduction, Brooks shared that Bailey is actually featured in the iconic scene in Animal House singing “Shout.”

Brooks also revealed that the songs were recorded for a live album, which is most likely Triple Live, which has been released digitally as a Fan Version and part of his Anthology III: Live book/CD combo. The project has yet to be released as a separate entity and features recordings from his massive 2014-2017 world tour.

The concert stop was the largest paid attendance in the history of Autzen Stadium in Eugene, OR.

Also, this Sunday, July 7th, in honor of his new single “Dive Bar” with Blake Shelton and National Dive Bar Day, Brooks is set to announce a dive bar tour. He “spoiled” the news during his weekly Facebook series Inside Studio G on Monday night (July 1st). The announcement will be made during a special Sunday broadcast of Inside Studio G on July 7th.