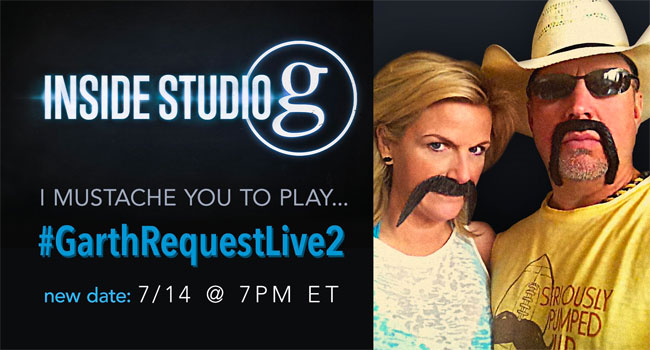 Garth Brooks and Trisha Yearwood have rescheduled their second Facebook Live acoustic concert for July 14th. The livestream was supposed to be held last Tuesday, July 7th, but was postponed “out of an abundance of caution” after someone in their camp may have been exposed to COVID-19.

The pair shared the new date in a humorous way — the duo donning fake mustaches in honor of Emmett Gilliam, Brooks’ stage production manager for his 90s tours who died a few years ago. Gilliam also ran the Oklahoma farm the couple called home after Brooks retired to raise his three daughters in 2000.

“The whole first week of July is so important to all of us in this camp,” Brooks shared during the announcement on his Inside Studio G Facebook Live program a few weeks ago. “They were called the ‘Days of Em.’ We lost Emmett [several] years ago. His birthday was 7/7. But always, when Emmett was alive…from July 1 to July 7 were the Days of Em, which meant you pretty much walked around in your shorts…you didn’t do any work whatsoever on the farm…drank a lot, ate too much. It was fabulous.”

Fans are encouraged to share songs they want to hear via #GarthRequestLive2. Their team will sort through requests in which Brooks and Yearwood will perform live on Facebook beginning at 7 pm ET/4 pm PT.

Garth Request Live 2 is the follow up to their massive March 23rd casual, at-home concert from Facebook that saw more than 5.2 million viewers watch and crash the online outlet. That performance sparked a CBS network special called Garth & Trisha Live! and a Grand Ole Opry performance in April that was broadcast on Circle TV and livestreamed.

The acoustic #GarthRequestLive2 show is ON for tomorrow! Post your song requests with the hashtag and sport a mustache in honor of Emmett!!! love, g pic.twitter.com/0dluAnpA3V