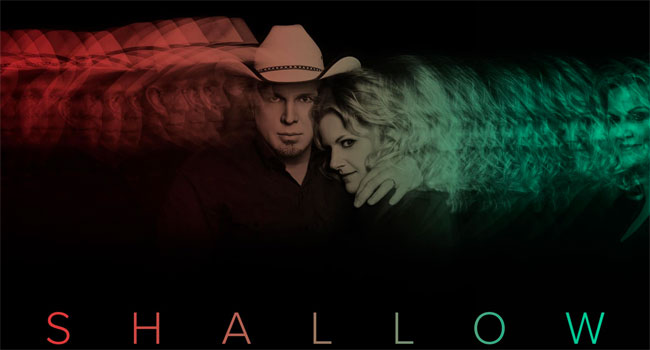 Garth Brooks and Trisha Yearwood are releasing the Oscar-winning “Shallow” as their next single. The country superstars covered the Lady Gaga/Bradley Cooper duet following fan demand during a live acoustic CBS performance that aired during the COVID-19 quarantine.

“Everything kind of lit up, and in this business everything lights up and then it goes away. This did not go away. It just kept lighting up and lighting up, so we went ahead and, per the people, tried it for the new record,” Brooks tells ABC’s Good Morning America (GMA) about the cover track.

He continues with a laugh, “And, man, I got to tell you, I always thought Bradley Cooper and I had a lot in common. Now I know we do. We both understand that a great song is just finding a great female singer and Gaga is one of the greatest. Miss Yearwood is one of the greatest … so it is officially going to be the single off the record coming up.”

The song will officially appear on Brooks’ upcoming Fun album that will be released on November 20th, alongside Triple Live Deluxe. Fans will be treated to a sneak peek of the song during livestream preview event on Wednesday (Oct 21st) that offers both new albums, along with their 2016 Christmas Together duets project, as a bundle for $20.

Fun will feature 14 tracks, including the lead single “All Day Long” and “Dive Bar” featuring Blake Shelton. The album will be available as a standard edition and a limited edition offering a holographic foil cover.

This is the the first time Triple Live has been available on its own. Aptly titled Triple Live Deluxe, the set features 30 tracks on 3 CDs with six different album covers containing photos from the road during the 2014-2017 world tour and most recent stadium trek. Walmart and Talk Shop Live will each be offering exclusive covers. All other retail outlets will offer the other four covers, but at random if purchased online.