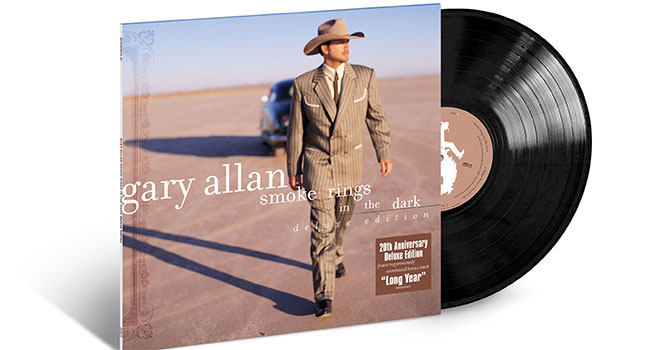 Iconoclastic country star Gary Allan’s 1999 platinum release Smoke Rings In The Dark stands as a milestone in the charismatic artist’s long-running career. The breakout release spawned three Top 40 country hits, including the Top Five smash “Right Where I Need To Be.” The album found him expanding and refining his sound, with expansive arrangements and dynamic performances that struck a chord with a legion of new fans.

On October 25, just one day before its 20th anniversary, MCA Nashville/UMe will release a new Deluxe Edition of Smoke Rings In The Dark, marking the album and artist’s first-ever appearance on vinyl. The anniversary edition augments the original LP’s twelve songs with the never-before-released bonus track, “Long Year,” a longtime fan favorite that Allan often plays at his shows. The LP will be released on standard black vinyl as well as on limited edition lime green vinyl, which will be available exclusively via UMG Nashville’s web store. This expanded 13 track edition will also be available for download and streaming at all digital outlets.

“It feels fitting that Smoke Rings would be my first vinyl release,” says Allan. “When I started working on the Smoke Rings album, I wanted a different sound. I wanted something that would stand out from what you were hearing at that time, but something that was still true to me and my sound. It was a game changer for me and I am just as proud of it today as I was twenty years ago.”

Upon its original release, Entertainment Weekly rated Smoke Rings In The Dark an A, and raved, “On his third album, Nashville’s most underrated honky-tonker takes on a bigger, more polished sound, and a new persona as a mysterious loner cowboy. With his brooding intensity and tremulous, aching tenor, Allan brings a quiet brilliance to this mostly left-field program, shining brightest on the title song, an interior monologue of love gone cold.” More recently, Billboard ranked Allan’s “10 Best Songs” and listed the titular track from Smoke Rings In The Dark as No. 3, exclaiming: “A lot of Allan’s early work had a definite retro-feel to it, and this song sounded like the perfect mixture of Merle Haggard and Chris Isaak. The vocals and the instrumentation both brought to mind the best music that came from Capitol Studios in Los Angeles, and Allan hammered this one out of the ballpark.”

Smoke Rings In The Dark established Gary Allan as one of country’s most popular and respected artists. In the years since its release, Allan has released seven studio albums, with sales totaling more than eight million and ten million tracks. The California native has been certified platinum on three back-to-back albums, certified gold five times, racked up five No. 1 hits on country radio and 14 Top 10 hits, and has amassed over 1.8 billion total streams. With the allure of a modern day outlaw, Allan has won over fans, peers and critics with his signature blend of smoldering vocals, rebellious lyrics and raucous live performances and has become a force on the country music scene that has remained true to his artistic voice each step of the way.

Allan re-signed with Universal Music Group Nashville in 2016, the label home for the entirety of his twenty three-year career. He is currently finishing up work for his next album. His most recent, Set You Free, topped the Billboard 200, a career first for Allan, and also debuted at the top of the Billboard Country Album chart, his fourth consecutive album to do so. It also produced his fifth No. 1 country radio chart topper with “Every Storm Runs Out Of Rain.” The artist described as “dark and dreamy” by Entertainment Weekly, “soulful and rough around the edges” by Playboy and deemed a “maverick” by Rolling Stone, sells out venues as a headliner from NY to LA and is currently thrilling fans on a tour that will keep him on the road for the rest of the year.