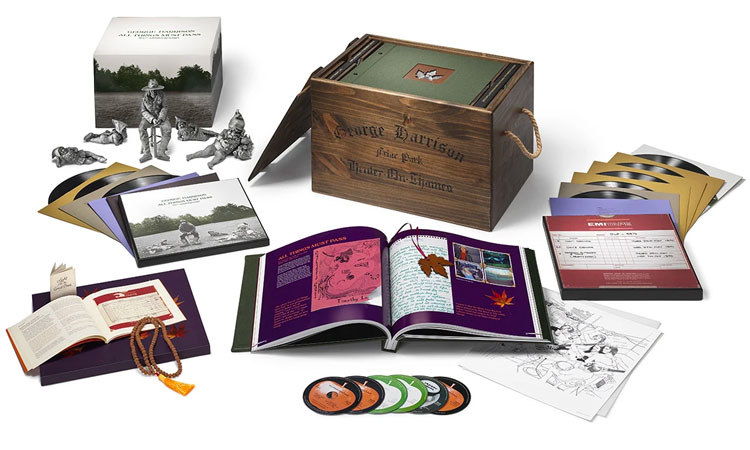 Recorded and released in the wake of The Beatles’ April 1970 dissolution, George Harrison’s landmark solo album, All Things Must Pass, is a fully realized statement by a bold and audacious artist. Produced by Harrison and Phil Spector, the 23-track All Things Must Pass stands tall a half century later as an epic, ambitious expression of Harrison’s remarkable gift for sheer songcraft, powerful spirituality and a celebration of both his inimitable individuality and unique camaraderie with his fellow musicians.

All Things Must Pass was an overdue artistic release for Harrison as a songwriter and musician. The first-ever triple studio album, All Things Must Pass overflows with a voluminous range of ideas, musical styles and influences, spanning rock ‘n’ roll, country, gospel, blues, pop, folk, R&B, Indian classical music, and devotional songs. Despite the album being wildly successful and Harrison’s affection for it, he would write in the liner notes for the 30th anniversary remaster, released in 2001, “I still like the songs on the album and believe they can continue to outlive the style in which they were recorded,” adding however, “it was difficult to resist re-mixing every track. All these years later I would like to liberate some of the songs from the big production that seemed appropriate at the time”.

Decades in the making and lovingly crafted by the Harrison family, All Things Must Pass has now been completely remixed from the original tapes for a stunning suite of 50th anniversary releases that fulfills Harrison’s longtime desire. Executive produced by Dhani Harrison, product produced by David Zonshine and mixed by triple GRAMMY Award-winning engineer Paul Hicks (The Beatles, The Rolling Stones, John Lennon), the new mix transforms the album by sonically upgrading it – making it sound brighter, fuller and better than ever before.

Exclusive to GeorgeHarrison.com, uDiscover, and Sound of Vinyl, All Things Must Pass 50th Anniversary Edition will be available as a very limited Uber Deluxe Edition box set, which includes the album on 180-gram 8 LP and 5 CD/1 Blu-ray Audio disc housed in an artisan designed wooden crate (approx. 12.4″ X 12.4″ X 17.5″). The collection explores the 1970 album sessions through 47 (42 previously unreleased) demos and outtakes, offering an inside look into the creative process. The Blu-ray allows fans to experience the main album in high-res stereo, enveloping 5.1 surround sound and Dolby Atmos mixes.

The crate contains two books, an elaborate and expanded 96-page scrapbook curated by Olivia Harrison, with unseen imagery and memorabilia from the era, handwritten lyrics, diary entries, studio notes, tape box images, a comprehensive track-by-track and more; while a second 44-page book chronicling the making of All Things Must Pass through extensive archival interviews with notes is also contained herein. The elegantly designed book pays homage to Harrison’s love of gardening and nature. The book also contains a wooden bookmark made from a felled Oak tree (Quercus Robur) in George’s Friar Park. This truly unique box will also contain 1/6 scale replica figurines of Harrison and the gnomes featured on the iconic album cover, a limited edition illustration by musician and artist Klaus Voormann, as well as a copy of Paramahansa Yogananda’s “Light from the Great Ones” and Rudraksha beads, contained in individual custom-made boxes.

All Things Must Pass will be released in multiple physical and digital configurations, including as a 5 LP or 3 CD Deluxe Edition that pairs the main album with the sessions outtakes and jams. The main album will be available on its own as 2 CD, 3 LP or limited edition 3 LP color vinyl.

“Since the 50th anniversary stereo mix release of the title track to my father’s legendary All Things Must Pass album in 2020, my dear pal Paul Hicks and I have continued to dig through mountains of tapes to restore and present the rest of this newly remixed and expanded edition of the album you now see and hear before you,” says Dhani Harrison. “Bringing greater sonic clarity to this record was always one of my father’s wishes and it was something we were working on together right up until he passed in 2001. Now, 20 years later, with the help of new technology and the extensive work of Paul Hicks we have realized this wish and present to you this very special 50th anniversary release of perhaps his greatest work of art. Every wish will be fulfilled.”

The All Things Must Pass sessions began just six weeks after the April 1970 announcement of The Beatles’ break-up. Two days were spent recording thirty demos in Studio Three at EMI Studios, Abbey Road in St. John’s Wood, London. The first day, May 26, saw Harrison record fifteen songs backed by Ringo Starr and his longtime friend, bassist Klaus Voormann, beginning with “All Things Must Pass.” The next day, May 27th, Harrison played an additional fifteen songs for co-producer Phil Spector. The All Things Must Pass Uber and Super Deluxe Editions collects all 30 of these remarkable demo recordings, including 26 tracks never before officially released and several songs that didn’t make the album like “Cosmic Empire,” “Going Down To Golders Green,” “Dehra Dun,” “Sour Milk Sea,” and “Mother Divine.”

The scope of Harrison’s songwriting remains breathtaking – his deeply personal introspection and striking wit is matched by the album’s boldly extravagant production. With its densely orchestrated textures and eclectic embrace of myriad genres, Harrison and Phil Spector’s groundbreaking sonic approach set a grand blueprint for countless artists to follow.

Harrison had been stockpiling material for nearly half a decade, with a number of songs – including “Isn’t It A Pity” and the title track – rehearsed with, but not recorded by, The Beatles. Further songs evinced Harrison’s growing frustration over those preceding years, including “Wah-Wah,” the dramatic “Beware of Darkness,” and “Run Of The Mill,” the latter named by both George and Olivia Harrison as one of their all-time favorites.

Written by Harrison while producing Billy Preston’s 1969 Apple Records solo debut but saved for his own album a year later, the glorious “What Is Life” highlights the artist at his most exultant. At the album’s heart were songs like “My Sweet Lord,” “Awaiting On You All” and the impassioned “Hear Me Lord,” each of which epitomized Harrison’s lifelong inner journey.

An anthem weaving a chant of the Hare Krishna mantra and “Hallelujah,” “My Sweet Lord” proved a worldwide smash upon its November 1970 single release, making history as the first solo single by a former Beatle to reach No. 1 in the UK or the US. Inducted into the GRAMMY Hall of Fame in 2014, the indelible anthem of spiritual and religious unity has remained one of the world’s most beloved songs, named among the “Greatest Songs of All Time” by both Rolling Stone and NME. Last year saw a limited edition clear vinyl 7″ of “My Sweet Lord” released by the George Harrison Estate in partnership with Record Store Day’s Black Friday event on November 27, 2020 – the official 50th anniversary of All Things Must Pass‘ original release.

Harrison’s close friendship with Bob Dylan begat two songs: the album-opening “I’d Have You Anytime” was co-written with Dylan, while the classic “If Not For You” was at the time an unreleased Dylan composition. The All Things Must Pass Super Deluxe Edition includes previously unreleased demo recordings of both songs as well as “Nowhere To Go” and “I Don’t Want To Do It,” another original Dylan song later recorded by George for a 1985 soundtrack but remains unrecorded by Dylan himself.

The original release of the project collected 18 songs over two LPs alongside a third LP – dubbed “Apple Jam” – showcasing four improvised instrumentals including a pair recorded as part of Derek and the Dominoes’ first ever official recording session in June 1970. In addition, the “Apple Jam” disc includes “It’s Johnny’s Birthday,” sung to the tune of Cliff Richard’s 1968 hit “Congratulations” and recorded as a gift from Harrison to mark John Lennon’s 30th birthday.

The All Things Must Pass session tapes created in 1970 include over 25 hours of music on 49 one-inch eight-track tapes, four two-inch 16-track tapes, and 44 quarter-inch stereo tapes. Richard Radford, Archivist for the George Harrison Estate oversaw the preservation of the tape collection, with the original analog multi-track and stereo tapes transferred to 192 KHz/24bit digital preservation copies.

All Things Must Pass was met by unanimous critical acclaim and spectacular commercial success, spending seven weeks at No. 1 on Billboard’s “Top LPs” chart and eight weeks atop the UK’s official albums chart (though chart records until 2006 mistakenly stated that it had peaked at No. 4). Currently certified 6x platinum by the RIAA, All Things Must Pass later received a 1972 GRAMMY Award nomination for “Album of the Year,” while “My Sweet Lord” earned a GRAMMY nod for “Record of the Year.” “What Is Life,” the album’s second single, also became an international hit, reaching the top 10 in the US and Canada as well as No. 1 in Australia and Switzerland.

All Things Must Pass has only grown in influence and stature in the half-century since its initial release, including induction in the GRAMMY Hall of Fame and inclusion on The Times of London’s “The 100 Best Albums of All Time” and Rolling Stone’s 2020 listing of “The Top 500 Albums of All Time.” 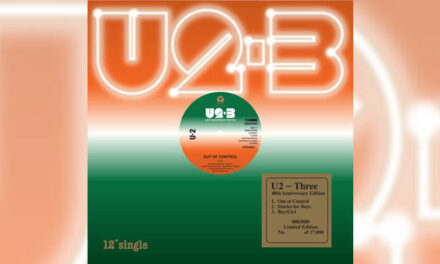