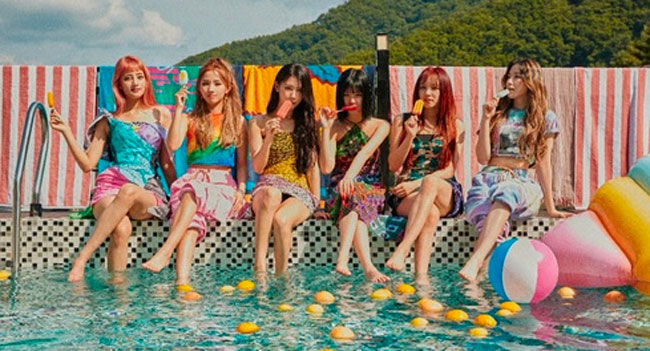 K-Pop sensation (G)I-DLE has revealed a new song entitled “Dumdi Dumdi” via Republic Records. The release follows the group’s nomination for their “Oh My God” music video in Best K-POP at the 2020 MTV Video Music Awards airing on August 30th.

Once again, the global phenomenon surprise listeners with an unpredictable and undeniable genre-breaking anthem. Composed by leader Soyeon, “Dumdi Dumdi” busts the boundaries between tropical house, moombahton, and pop with this summer-ready international banger. Sunkissed island grooves give way to a bright refrain that’s impossible to shake as all six members flex their signature styles on this addictive bop.

“Dumdi Dumdi” lands hot on the heels of their latest anthem “I’m The Trend.” The track has already generated 1.8 million-plus Spotify streams and 1.8 million YouTube views as their monthly listeners eclipsed 3.5 million on Spotify.

Not to mention, they just broke the internet with the 2020 (G)I-DLE Online Concert i-Land: Who Am I. Drawing fans worldwide, they closed out the explosive set with the concert debut of “I’m The Trend,” Penned by Minnie and Yuqi as a “thank you” to audiences worldwide, the single drops lyrical nods to fan favorites, including “Oh My God,” “Blow Your Mind,” “Latana,” Lion,” and “Uh-Oh.” The live performance also incorporated key parts of the choreographies from those hit songs. Musically, it serves up a sizzling Latin-style bounce punctuated by spirited and spunky rhymes and a bold chant of “I’m The Trend.”

Recently, (G)I-DLE made their official U.S. debut with the release of I Trust. The mini album reached the No. 1 position at the iTunes Overall Album Charts in 61 markets. The group continue to receive tastemaker praise across the board. In the wake of I Trust, MTV observed, “It’s that tenacity that solidifies (G)I-DLE as a formidable group eager to claim the global throne.” Meanwhile, Just Jared proclaimed, “(G)I-DLE is ready to take over!” Billboard described the music video for “Oh My God” as “Stunning.” The visual alone has racked up an astonishing 103 million YouTube views since its release in April.

In 2019, (G)I-DLE reached unparalleled heights ignited by the I Made EP and the standout single “Senorita.” Going viral, the latter racked up 87 million YouTube views and 44 million-plus Spotify streams, as the hit streak continued on “Uh-Oh,” which E! Online applauded and noted, “The girls exude confidence and we are loving it!” Subsequently, (G)I-DLE gained momentum as one of the most popular acts on Mnet’s Queendom, an American Idol-type show with a reality TV format. As they went up against more established K-Pop artists known throughout Korea, (G)I-DLE quickly became the fan favorite and the highlight of every episode. On the finale of the show, and to the delight of fans worldwide, they initially released “Lion,” garnering immediate critical acclaim and trending on Twitter for the first three days after release. The song notably spent four weeks on the Billboard World Digital Song Sales Chart, and Billboard voted it “One of the Top 25 K-Pop Songs Released in 2019.” Not to mention, the pop starlets have received multiple awards, including “Best Performance” at the annual Golden Disc Awards and “The World K-POP Rookie Award” from the GAON Chart Music Awards. In addition, they performed at the Golden Disc Music Awards in January to an uproar of fan cheers along with other critically acclaimed artists such as BTS, MONSTA X, TWICE, and others.

2020 remains poised to be (G)I-DLE’s biggest and boldest year yet as they expand their reach into North American and once again prove their international influence and might.