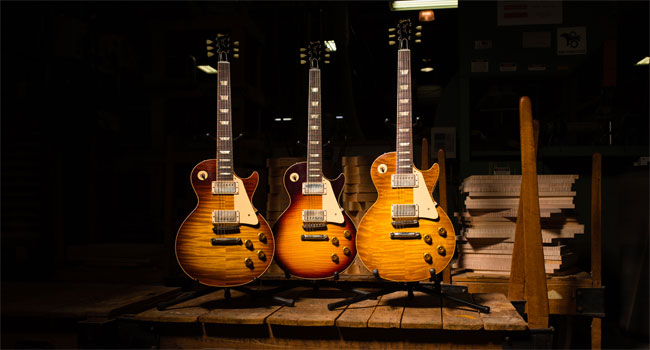 This summer, Gibson, the iconic, American-made, leading instrument brand is launching a global search for missing shipping ledgers from 1959-1960. The 1959-1960 Gibson ledgers contain the shipping records of all the Gibson guitars created during that year, and proudly documents an important period in Gibson’s 126-year old history; the pinnacle of the Gibson Golden Era. The 1959-1960 shipping ledgers in question disappeared from Gibson’s archives around thirty years ago and may have never made the move with the company from Kalamazoo, MI to its hometown of Nashville, TN.

The Gibson family is asking for assistance in recovering the missing 1959-60 ledgers, and upon validation of the 1959-60 ledger’s authenticity, the person or persons who safely returns the books will receive a $59k cash reward, with zero questions asked.

In addition, Gibson is seeking to recover pre-1970 documents, blueprints, and unique Gibson historical assets. Gibson is willing to evaluate relevant items and individual rewards terms on a case-by-case basis. Gibson reserves the right to validate information and to authenticate materials as genuine articles prior to issuing rewards for pre-1970 items, which may include cash, Gibson gift cards, instruments, and experiences (conditions apply).

Those who may have information need to submit validation requests to 59Ledger@gibson.com or Ledger@gibson.com. Emails must include a written description; photograph(s) and/or videos of the items; and contact email and phone number.

Validation email requests will be reviewed within 15 business days by the Gibson Historical Committee (GHC), composed of Cesar Gueikian, Mat Koehler (Head of Product Development), Mark Agnesi (Director of Brand Experience) and Jason Davidson (Director of Consumer Services). Based on the GHC’s analysis, the submitting party will be contacted with next steps and instructions.

“As a custodian of Gibson, I am very excited about this search. I hope we can recover these ledgers as they contain important information about the pinnacle of our Golden Era,” says Cesar Gueikian. “It will be interesting to see where in the world they surface, given that the last time they were seen was in Michigan. While they are dusty old books to anyone else, these ledgers are part of our history, DNA, and our iconic past. These ledgers contain the shipping information, including the serial numbers and shipping party, for the most valuable guitars in history; the Gibson 1959 and 1960 bursts.”

“It’s no wonder that for the last 62 years, many of the top players, collectors, and dreamers have dubbed the original Gibson Les Paul, produced in Kalamazoo Michigan by some of the greatest instrument builders, ‘The Holy Grail’,” shares Rick Nielsen. “It held an unparalleled value back then with a price tag of $245; today, the value is 1,000 times that, and, in some cases, worth so much more – monetarily, historically, artistically, and most importantly…musically cool.”

Blues rocker Joe Bonamassa adds, “To find the original ledgers is to unearth knowledge of a pivotal point in America’s contribution to not only guitar manufacturing but to Rock and Roll itself.”

The 1957-1960 Gibson Les Paul Standard guitars are some of the most intrinsically valuable in history, even without a famous player attached. Only 643 of the 1959 Gibson Les Paul Standard were made and it has become one of the most iconic guitars in history. ‘58-‘60 guitars have been adopted by some of the world’s greatest guitarists Jimmy Page, Keith Richards, George Harrison, Paul McCartney, Eric Clapton, Jeff Beck, Duane Allman, Peter Green, Gary Moore, Mike Bloomfield, Billy Gibbons, Joe Perry, Slash, Rick Nielsen, Joe Bonamassa, Don Felder, Joe Walsh, Kirk Hammett, Mike McCready, Brian Ray, Dave Amato, John Shanks and most recently Jason Isbell, to name a few.

The 1958 and 1960 Gibson Les Paul models are almost identical to the 1959 with minor spec differences, and each year is highly prized; a 1959 with a figured Tiger Maple design can start at $500k. Gibson brought back the classic Les Paul Standard burst guitars and reissued each year with historical specs. These guitars are not just a tribute to the priceless original models-they are an exact clone of them. From laser-scanned dimensions, to color-matched shades of sunburst, every element has been rendered in unbelievable detail.