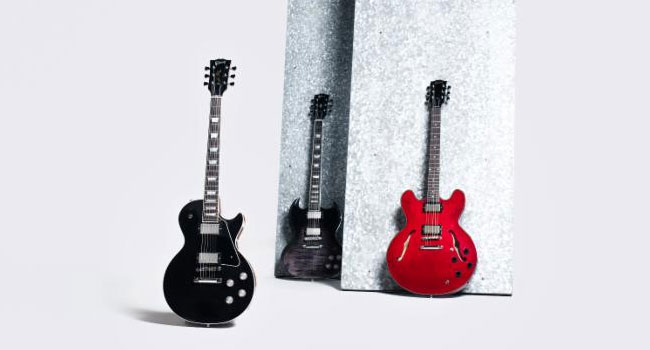 In 2019, after more than a century, artists, players and fans are experiencing Gibson, the all American-made instrument brand, rejuvenated. Gibson has announced it will unveil multiple experiences at Summer NAMM 2019 next week in the brand’s hometown of Nashville, TN. Gibson will showcase new collections, artist collaborations, exciting new gear and accessories, as well as brand-new programs for musicians worldwide at Summer NAMM.

At Summer NAMM, Gibson will showcase the new line-up and artist collaborations including the new G-45 Series Collection, Studio and Standard guitars which are hand-crafted by the skilled artisans in our acoustic facility in Bozeman, Montana who build our most cherished and iconic acoustic models. The new G-45 series offers a superior sounding acoustic guitar at a compelling price, designed and crafted in the U.S.A. Each G-Series represents Gibson’s commitment to creating the world’s most relevant, played and loved guitars, which have shaped sound for 125 years, sought-after by countless artists, with the highest quality in both tone and appearance. The G-Series offer players of all levels, the perfect mix of tone, performance, traditional Gibson style and value.

The Gibson Modern Collection builds on Gibson’s solid legacy of coveted innovation by introducing modern features players have embraced, such as lighter-weight bodies, push-pull systems to switch between the Burst Bucker and P90 sounds, innovative slim-taper necks with asymmetrical profiles, shaved heels for effortless access to the highest frets as well as maximum sustain and stability. The Gibson Modern Collection includes the Les Paul and SG Modern, Les Paul Studio and Tribute models, the new ES-235 and modern versions of the ES-335, Flying V and Explorer B-2, and modern Hummingbird, J-45 and J-15 as well as, the Parlor acoustic models.

The pinnacle of craftsmanship, quality and sound excellence, Gibson Custom Shop celebrates Gibson’s legacy through accuracy, authenticity and attention to detail. This year, we celebrate the 60th anniversary of the 1959 Les Paul Standard, the holy grail, this release marks their most historically accurate recreation of the most iconic guitar in history.

Across all of Gibson’s collections, the story will continue to be told with the greatest partners, the musicians. Gibson has again teamed with the nine-time GRAMMY Award-winning singer, songwriter and musician Sheryl Crow to create the Sheryl Crow Country Western Supreme acoustic guitar. The Sheryl Crow Country Western Supreme will be available worldwide this Fall 2019 to coincide with the release of her new album Threads, out August 30th. Gibson will also launch the Brian Ray SG Jr from the Custom Shop, as well as the Vivian Campbell Holy Diver Les Paul from Epiphone.

With a clear focus on quality, in a short period of time the new team at Gibson have created a more confident Dealer and Artist base, invested in a renewed commitment to the brands under the Gibson umbrella, including Epiphone, Kramer, Steinberger, KRK Systems, Cerwin Vega, and Stanton and proven they can listen to the market to create compelling, relevant high-quality guitars and set the stage for the next era of instruments. By leveraging its iconic past and leaning into the future, Gibson has ignited its new chapter as the guitar of choice for artists across generations and genres of music.