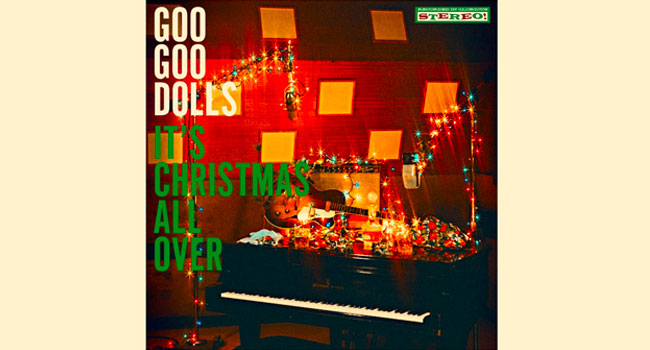 Goo Goo Dolls are celebrating Christmas early with the release of their new cover rendition of the holiday classic, “Let It Snow”. The reimagined version marks the latest single from their forthcoming, first-ever Christmas record It’s Christmas All Over, due out October 30th via Warner Records.

USA Today premiered the track yesterday in an exclusive feature with frontman John Rzeznik, who also co-produced the album alongside the band’s longtime collaborators Brad Fernquist and Jimmy McGorman.

The band recently debuted the first single from It’s Christmas All Over — “This Is Christmas,” a timeless ballad that encapsulates the warmth and spirit of classic Christmas records. “This is Christmas” is one of two new original songs set to be featured on the album in addition to a diverse collection of iconic holiday tracks, several rarities and a jazz-infused medley finale.

Both “Let It Snow” and “This Is Christmas” are available now as instant grat tracks with all pre-orders of It’s Christmas All Over. The band is also offering exclusive merch bundles including a red vinyl LP, a Goo Goo Dolls Crosley record player and additional limited edition items that are perfect for the holidays.

The group will host an immersive livestream concert in partnership with the livestreaming music platform FanTracks on Saturday, October 24th where they will deliver a completely live performance in full-scale production featuring hits from across their iconic catalog. Fans from around the world will also have access to multi-camera viewing and the ability to visit a virtual merch booth and purchase meet & greet and VIP packages for the show, giving them the complete experience of a rock concert from the comfort of their own home.

This concert will be followed in December by It’s Christmas All Over, the first-ever, Augmented Reality Movie Musical, produced and directed by Barry Summers where the band will perform tracks from the upcoming Christmas record.