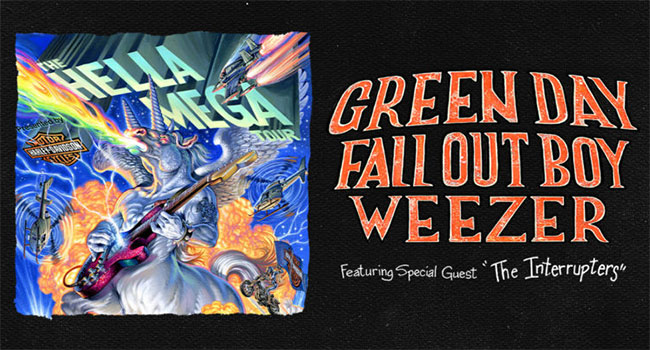 Green Day, Fall Out Boy, and Weezer, three of the biggest acts in rock music, have announced they will be heading out on the road together for the first time ever on The Hella Mega Tour presented by Harley-Davidson. To celebrate the tour reveal, all three bands will perform a historic show tonight (Tues, Sept 10th) at the legendary Whisky A Go Go in Los Angeles.

The global tour kicks off June 13, 2020 in Paris and will visit cities across Europe and the UK throughout the month including Glasgow, London, and Dublin. Produced by Live Nation, the 20 city North American outing will bring the bands to some of the most renowned stadiums including Dodger Stadium, Wrigley Field, Citi Field, Fenway Park, and more. Beginning July 17th in Seattle, WA, the outing makes stops in Houston, Miami, Toronto, New York and more, before wrapping August 29th in Philadelphia, PA. More dates will be announced. The Interrupters will appear as special guest on the tour.

“Harley-Davidson and rock & roll have been synonymous throughout history,” states Neil Grimmer, President of Brand for the Harley-Davidson Motor Company. “So it’s only natural for Harley to present the most epic, full throttle rock tour in history!”

Concert-goers will see and experience the newest Harley-Davidson motorcycles, including the fully electric LiveWire and their new, exciting lineup of electric bicycles.

In celebration of this announcement, all three artists are also thrilled to announce new singles which will be a first taste of their respective forthcoming albums. All three singles are available now. Fall Out Boy’s Greatest Hits – Believers Never Die Volume 2 will be released on November 15th. Green Day’s Father Of All… will be released February 7, 2020. Weezer’s Van Weezer will be released in May 15, 2020.

Tonight (Sept 10th) will mark the beginning of a three-day music takeover on ABC’s Jimmy Kimmel Live!, with a first ever TV performance of the new music from Weezer followed by Fall Out Boy tomorrow night (Wed, Sept 11th) and Green Day on Thursday (Sept 12th). All episodes begin at 11:35 pm on ABC and can be found online. Additionally, each of the band’s new songs were serviced to all rock and alternative radio stations and will be featured once an hour on a three hour loop all day with Cumulus, Entercom, and iHeart radio chains.