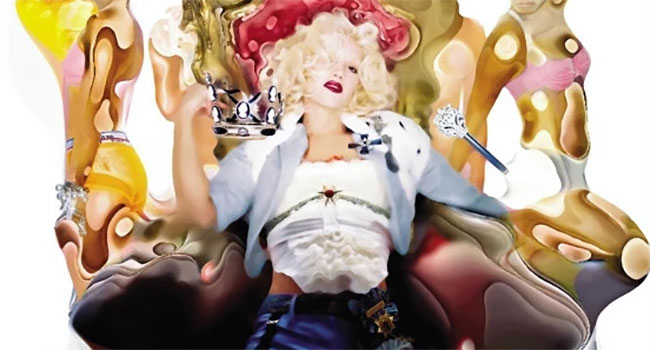 After achieving global success as a performer, songwriter and frontwoman for No Doubt, Gwen Stefani released her first solo album – Love.Angel.Music.Baby. – on November 22nd. To celebrate the 15th anniversary of its release, the album has been remastered by five-time GRAMMY nominee Chris Gehringer (Rihanna, Drake, Lady Gaga) of Sterling Sound. Interscope Records will release Love.Angel.Music.Baby. – 15th Anniversary Edition in digital format on November 22nd.

Stefani, a three-time GRAMMY winner, will perform a medley of songs from Love.Angel.Music.Baby. on the Top 11 live results show of The Voice airing Tuesday, November 26th at 8 pm ET/PT on NBC. She is now in her fourth season as a coach on the Emmy-winning NBC series. Stefani has reissued two items from the original Love.Angel.Music.Baby merchandise collection – a hoodie and a t-shirt, both including a digital download of the remastered album.

Hailed as “an irresistible party” by Rolling Stone and a “ferocious declaration of independence” by Q Magazine, Love.Angel.Music.Baby. is an exuberant reinvention of the music that influenced Stefani in her youth – a genre-spanning work that encompasses new wave, hip hop, electropop, soul and more. The album has sold more than 15 million units worldwide to date. It is certified Platinum or greater in ten countries, including 5x Platinum in the U.S. Love.Angel.Music.Baby. was nominated for two GRAMMY Awards– Album of the Year and Best Pop Vocal Album – and the first three singles also received GRAMMY nods.

Stefani addresses her decision to record a solo album on the lead-off track and first single, “What You Waiting For?,” which she wrote with Linda Perry. Produced by Nelle Hooper, the song topped Billboard’s Dance Club Songs chart and spent 20 weeks on the Hot 100. “Rich Girl” featuring Eve and produced by Dr. Dre followed. It marked Stefani’s first top 10 entry on the Hot 100 and claimed the No. 1 spot on the UK Official R&B Singles chart.

In six short weeks, The Neptunes-produced “Hollaback Girl” ascended to the top of the Billboard Hot 100, where it spent four consecutive weeks, giving Stefani her first No. 1 single on the chart. “Hollaback Girl” was the first song in history to reach one million digital downloads and topped Billboard’s year end Hot Digital Songs tally in 2005. Views of the accompanying video, directed by Paul Hunter, are nearing 200 million. Driven by the success of “Hollaback Girl,” Love.Angel.Music.Baby. climbed to No. 5 on the Billboard 200 in June 2005. The album spent 78 weeks in total on the tally. Other singles included Cool,” “Luxurious” and “Crash.”

Her follow-up album, 2006’s The Sweet Escape, debuted at No. 3 on the Billboard 200 and contained the Hot 100 top 10 smash “Wind It Up.” This Is What The Truth Feels Like, Stefani’s third solo effort, entered the Billboard 200 at No. 1 in 2016 and includes her powerful No. 1 single “Used To Love You.” You Make It Feel Like Christmas, her first holiday collection, was released in 2017. To date, she has sold more than 50 million units worldwide.

Stefani will perform at Christmas at Rockefeller Center on December 4th, airing live on NBC. She will conclude her two year Las Vegas headlining residency Gwen Stefani – Just A Girl at Zappos Theatre at Planet Hollywood Resort & Casino in May 2020.