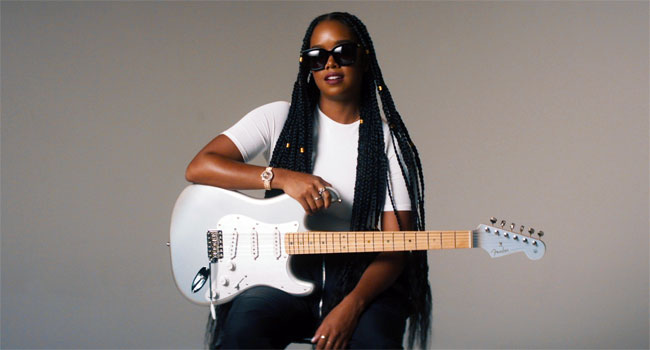 Fender Musical Instruments Corporation (FMIC) has released the new H.E.R. Signature Stratocaster in collaboration with the multiple Grammy-Award-winning R&B singer-songwriter. She has long played Fender guitars to attain her signature sound on projects, such as her debut album H.E.R., which was certified RIAA platinum this year. A project more than a year in the making, the all-new H.E.R. Signature Stratocaster has been designed to the artist’s specifications with a distinctive look and exceptional tone; it features Fender Vintage Noiseless pickups, a single ply anodized aluminum pickguard and an alder body finished in stunning Chrome Glow inspired by her favorite nail polish color. To coincide with H.E.R’s signature guitar launch, some of her biggest hit songs will be added to Fender Play, the complete online learning app for guitar, bass and ukulele. When those songs are added to Fender Play later this year, fans around the world will be able to play their very own H.E.R. Stratocaster® while learning her songs.

“Fender was the reason I began playing guitar,” states H.E.R. “My father taught me how to play my first blues scale on a mini black-and-white Strat, so it’s absolutely surreal I have partnered with Fender to design my own Signature Stratocaster®. As an artist, I find that my most personal thoughts make the most relatable music. By designing a Stratocaster with a color, shape and sound that is one-hundred-percent my own, my hope is that other young women and players from all backgrounds feel inspired to pick up this guitar, tap into their thoughts and create amazing music.”

“This is the culmination of a years-long relationship between Fender and H.E.R., and a testament to everything she has done to inspire a new generation of players,” shares Justin Norvell, EVP Fender Products. “This guitar was in the works alongside the custom clear acrylic Strat we made for H.E.R.’s 2019 Grammy performance and the all-black Strat for her 2020 Pepsi Big Game commercial. This is a guitar that’s just as eye-catching as those iconic pieces and finally accessible to everyone. Players that are drawn in by the unique look of the guitar are going to be rewarded with a neck, pickups and bridge that have stood the test of time and are up to H.E.R.’s high standards for recording and touring.”

This is the latest installment of a longstanding partnership between H.E.R. and Fender. Stratocaster guitars have been a part of several breakout moments for the artist, including a performance of “Hard Place” at the 2019 Grammy Awards with a clear acrylic Stratocaster and then a custom black Stratocaster in a Big Game Pepsi commercial in 2020 with Missy Elliot. This new Signature Strat is designed to enable the next generation of guitar players — of which H.E.R. is a major influencer — to access her trademark look and soulful sound. As part of Fender’s continuing commitment to recognize the diversity of its longtime players and new guitarists, H.E.R. is now the first Black female artist to be honored with a Fender Artist Signature model.

“We are honored that H.E.R. has chosen to work with Fender on her debut artist signature model,” comments Evan Jones, CMO, Fender. “She is an incredible, Grammy Award-winning artist whose future in the music industry is bright, and we are proud of the authentic relationship we have built with H.E.R. over these last several years. As we look to the future of guitar, we believe it’s our responsibility to support the increasing diversity and adoption of the instrument across all genres, and it’s also our belief that investing in more signature projects and collaborations with more Black, Latinx and female artists is an important next step toward expanding the cultural relevance of guitar and the Fender brand.”

“It’s important for young aspiring players to see themselves in the heroes they look up to, and we know who we amplify with our brand can help make that impact,” Jones adds.

The H.E.R. Signature Stratocaster features an alder body with a traditional tonewood finished in a stunning new iridescent color. The 9.5″ radius, one-piece maple neck allows for classic Fender tone and effortless bending. The model is also cut in a mid-’60s “C” neck maple shape similar to Stratocaster® of that decade made for exceptionally comfortable playing. Fender Vintage Noiseless pickups project clear and articulate tone with no 60-cycle hum and a six-screw, vintage-style Fender Synchronized Bridge that provides smooth vibrato. A custom neck plate engraved with H.E.R. artwork rounds out the personalized touches.

In true tradition, Fender’s Artist Signature Series honors iconic musicians through product progression and storytelling, creating instruments inspired by the unique specifications of the world’s greatest guitarists and bassists. H.E.R. also discusses her playing style, technique and her new signature guitar in an episode of Fender’s serialized social video series, Fender Sessions. Fender Sessions takes a deep, personalized dive into some of Fender’s beloved artists and in turn gives the brand a chance to elevate and support its talented base of global players by giving them a platform to showcase their passion. At its core, the series is about amplifying the voice of the artist, giving them a way to fully articulate their vision and mastery of their craft. Each video is intimate, candid, personal and most importantly – raw.

Fender discusses the all-new H.E.R. Signature Stratocaster specs and all details in an episode of Fender’s serialized social video series: Fender Demos here. Fender Demos is an educational video series focused on providing a deep dive into Fender’s newest products. The series focuses on showcasing not only the key features and benefits, but also the sonic quality of Fender’s instruments, amplifiers and pedals. In addition to product demos, the series also provides valuable beginner, intermediate and advanced tone tips, set-up and maintenance guides and insights to getting the most out of your Fender gear.

H.E.R. (Having Everything Revealed) is a singer-songwriter whose career balances massive commercial success with a characteristically enigmatic relation to the limelight. After initially debuting the mysterious persona on H.E.R., the widely-acclaimed eponymous debut won Best R&B Album at the 61st Grammy Awards and H.E.R.’s smash-hit “Best Part” won a Grammy Award for Best R&B Performance. Owing to her versatility as an artist with over 7.5 billion combined audio and streams worldwide, H.E.R. has made charting hits with artists ranging from Ed Sheeran to YG to Jhené Aiko, and toured alongside Chris Brown, Childish Gambino and Bryson Tiller, in addition to creating her very own Lights On festival.