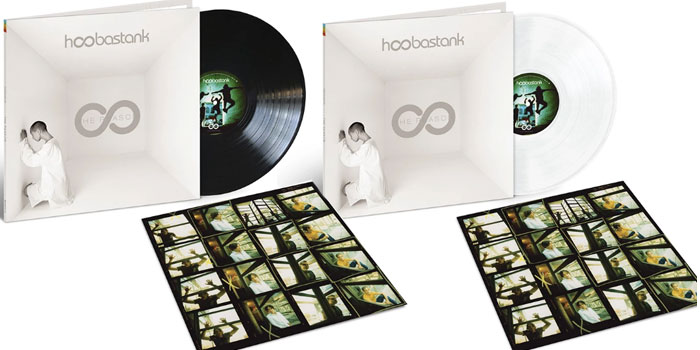 On October 4th, Island/UMe will celebrate the 15th anniversary of Hoobastank’s sophomore studio album The Reason with a multi-format reissue that includes five bonus tracks. In addition to being released as a digital deluxe edition, The Reason also makes its vinyl debut on both standard black and limited edition white vinyl. Both vinyl editions will include a bonus never before released acoustic version of the Southern California band’s biggest and most impactful hit, “The Reason.”

The digital deluxe edition of The Reason will include the bonus tracks “The Reason (Acoustic)” plus four long-unavailable B-sides: “Force Feed Me” (previously unreleased), “Connected” (from Halo 2 Original Soundtrack and New Music: Volume One), “Did You” (from the soundtrack Spider-Man 2 – Music From And Inspired By), and “Right Before Your Eyes” (from the Daredevil: The Album soundtrack).

“Right Before Your Eyes” will be available to download as an instant grat upon pre-order and to stream on all digital services. The lyric video for the song will premiered on August 21st. uDiscover, the online store where fans dig deeper into music by their favorite artists, will also have a commemorative T-shirt available for purchase alongside the limited edition white vinyl.

Having sold nearly three million copies in the United States alone, Hoobastank’s GRAMMY-nominated, RIAA-certified double-platinum The Reason firmly established the group’s position as a modern alt-rock outfit capable of shifting gears from sincere balladry to headthrashers in a heartbeat. The single, “The Reason,” which has garnered over one billion streams globally, hit No. 1 on the Billboard Alternative Songs chart and No. 2 on Hot 100 singles. The Reason ultimately reached No. 3 on the Billboard 200 Albums chart and spawned two additional Top 20 hits “Out of Control” and “Same Direction.” “Same Direction” also broke into the top 15 on the Billboard Modern Rock chart and “Out of Control” made its way into the top 10 on the same chart.

Produced by GRAMMY-nominated hitmaker Howard Benson (My Chemical Romance, Daughtry, P.O.D.) and recorded at a number of locations including Benson’s own Sparky Dark Studio in Calabasas, California, as well as Valley Village and Bay 7 Studios, The Reason built upon the earnest, hardcharging musical palette established on the band’s self-titled 2001 Island Records debut, Hoobastank. The heartfelt title track, “The Reason,” was a major hit across many formats all over the world, and it’s complemented by perpetually catchy songs like the energetic “Out of Control,” the frenetic “Same Direction,” and the uplifting album-ending anthem “Disappear.”

“The Reason,” which remains a streaming powerhouse and leads listeners to discover the rocking side of Hoobastank, averages 3.5 million on-demand streams per week. The 15th anniversary edition of The Reason revisits the band’s breakthrough album on wax as well as a digital deluxe edition with a selection of exciting bonus tracks.