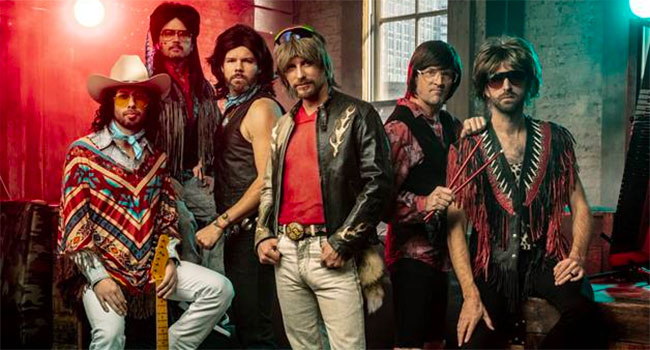 Hot Country Knights brings everyone’s favorite decade — the 90’s — back to life in style with a debut album that’ll get you two-steppin’ and chucklin’ at the same time. The K Is Silent, out May 1st via UMG Nashville, sees the comedic country group dressed in 80s attire, bringing Yee Haw type fun and rootsy country music back to the forefront of a current diluted genre.

The introductory single, “Pick Her Up,” pairs the retro group with 90’s hitmaker Travis Tritt in an ear worm that is a true reflection of country’s most popular era. The catchy ditty is a fierce uptempo throwback to the 90’s sound that Tritt dominated during the decade full of rocking guitars and twangy vocals. Since starring in the video, the song pops into my head every time I hear or see Tiffani Thiessen’s name and face and it doesn’t leave easily. In fact, the song is so good, I couldn’t stop singing it as I watched Saved By The Bell: The Complete Series (including the two films) on DVD during the quarantine.

The group shares the mic with another 90’s country star, Terri Clark, as they slow things down for the sultry duet, “You Make It Hard.” The track features mature vocals from Clark and Knights frontman Doug Douglason (aka Dierks Bentley) with classic country instrumentation that echos Clark’s 1998 hit “Now That I Found You.” This song sings hit all over it.

The Knights pay homage to two other country superstars: Tracy Byrd and Garth Brooks. “Moose Knuckle Shuffle” is a bear resemblance of Byrd’s “Watermelon Crawl” with its structure and content, while “Then It Rained” honors Brooks’ “The Thunder Rolls,” respectively.

Much like “Watermelon Crawl,” “Moose Knuckle Shuffle” tells the story of a newfound dance after the narrator stumbles across a group of locals gathered in the small town square. The song even name drops Byrd and his signature track: “Tracy Byrd showed up saying, ‘What’s this ya’ll? It may even be better than the Watermelon Crawl’.”

“Then It Rained” is a comedic slow ballad with the music and structure similar to “The Thunder Rolls,” but you’ll need to listen to the track yourself to find out more. The song starts with acoustic guitar and light percussion as “rain” falls in the background. The lyrics allude to a storyline, but throws the listeners a curveball with it’s comedic punch.

I was rather amused by Hot Country Knights when I saw them open for themselves (Dierks Bentley and his road band) at The Hollywood Bowl in 2018. I didn’t take them too seriously — and apparently neither do they — as they pranced around the stage performing 90’s country cover tunes. However, I’m pleasantly surprised by this album of all original material that Bentley mostly co-wrote and produced.

The K Is Silent is a great mix of comedy and music interspersed with some timeless hits. The album is the ultimate throwback to an era that is way overlooked in the modern world. The Knights join the likes of Luke Combs, Ashley McBryde and Jon Pardi in taking country back to its roots. This is a must have album for the ultimate country fan!