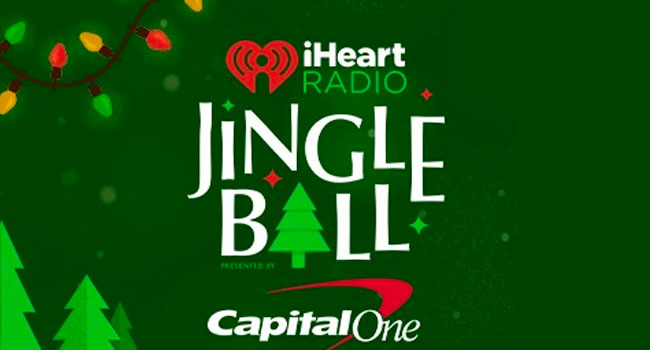 iHeartMedia will celebrate the holiday season across the nation with its annual iHeartRadio Jingle Ball Presented by Capital One – the season’s most anticipated holiday music event — with this year’s performances by an unparalleled lineup of the biggest names in music today, including Billie Eilish, Doja Cat, Dua Lipa, Harry Styles, Lewis Capaldi, Sam Smith, Shawn Mendes and more. Although fans are unable to attend the 2020 national iHeartRadio Jingle Ball in person, given the limitations on live events during the pandemic, this year’s virtual event will invite music fans into the homes of today’s top artists to share their personal holiday traditions and perform their biggest hits along with never-before-heard covers of iconic holiday songs.

This year’s iHeartRadio Jingle Ball will broadcast across more than 95 iHeartMedia CHR radio stations nationwide and on the iHeartRadio App, and will also stream on The CW App and CWTV.com on Thursday, December 10th at 9 pm EST/6 pm PST. In addition, The CW Network will broadcast the event as an exclusive nationwide television special on Monday, December 14th at 8 pm EST/PST.

“For 25 years, iHeartRadio’s Jingle Ball has showcased performances from the year’s biggest artists in hit music, live on stage in front of screaming fans,” states Tom Poleman, Chief Programming Officer for iHeartMedia.” Because of the pandemic, we’re moving from the stage to the artists home this holiday season for what will be an unforgettable show with amazing performances and moments that can only happen at the iHeartRadio Jingle Ball.”

In addition, The CW will televise a one-hour iHeartRadio Jingle Ball Greatest Moments special, celebrating the 25th anniversary of the event through performances, special backstage moments and more on Thursday, December 3rd at 8 pm EST/PST.

“This year, the iHeartRadio Jingle Ball shows its resiliency by giving music fans a rare opportunity to go inside the homes of the biggest artists of the year for a special look at how they celebrate the holidays and hear them perform the most listened to songs of the year,” says John Sykes, President of Entertainment Enterprises for iHeartMedia. “And, as always, they can listen nationwide on their favorite iHeartRadio stations and see it all on The CW Network.

Each year, iHeartMedia radio stations across the country host live Jingle Ball concerts in local markets including Tampa; Dallas/Ft. Worth; Los Angeles; San Francisco; Minneapolis/St. Paul; Philadelphia; New York; Boston; Washington, D.C.; Chicago; Atlanta and Miami/Ft. Lauderdale featuring performances by the year’s most iconic artists as well as emerging talent. Over the past 25 years, Jingle Ball has become the biggest holiday celebration in music. The show has evolved into a sold out, multi-city national tour, with tickets selling out in minutes.

For the sixth straight year, Capital One will be the national presenting partner for the iHeartRadio Jingle Ball. Capital One cardholders will have the exclusive opportunity to enter the “Capital One Holiday Jam” contest for a chance to be one of 25 lucky winners featured in a virtual holiday classic sing-along with a Jingle Ball headliner. Winners will also hear from the artist in a private virtual meet and mingle discussion. Capital One cardholders can enter the contest from November 5th at midnight ET through November 16th at 11:59 pm ET.