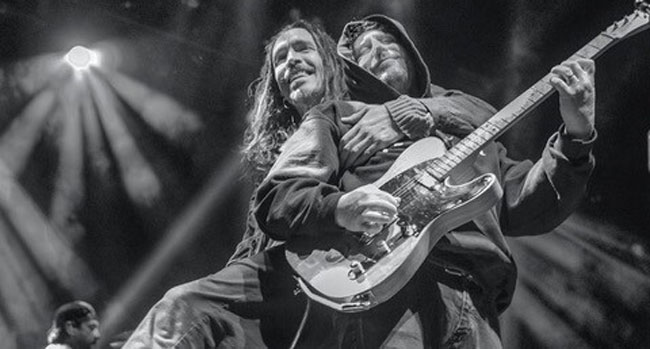 Incubus frontman Brandon Boyd and guitarist Mike Einziger have always been hyper aware of swelling social concerns, as evident in the original recording of “Agoraphobia” following 9/11. Now with these issues at all time fever pitch and in even more need of community dialogue and support, Boyd and Einziger teamed up to release a new live video version of the song. The new video comes just months after the highly anticipated release for their EP, Trust Fall (Side B).

“’Agoraphobia’ is a song we wrote about 17 years ago and it was on our 2003 release, A Crow Left Of The Murder,” Boyd reflects of the track. “Lyrically, I suppose, I was reacting to a growing cultural concern with how we were proceeding in a post 9/11 world, as that event was still very close in the collective gestalt. I was lamenting reading the daily news feeds and seeing where things were heading and feeling more and more called to just give in to a sense of hopelessness and just stay inside for the rest of my life. By the end of the song I wake up to the idea that I indeed DON’T want to stay inside for good and there are still pangs of hope and optimism (though cautious) that reside in my heart and my mind. Mike and I recorded this acoustic version a couple of weeks ago while in lock down because it had an eerily familiar relevance to he and I as this forced (though necessary) collective Agoraphobia was setting in. Herein we aren’t encouraging a fear of the outside world, but merely singing a song that seems to encapsulate the overall mood.”