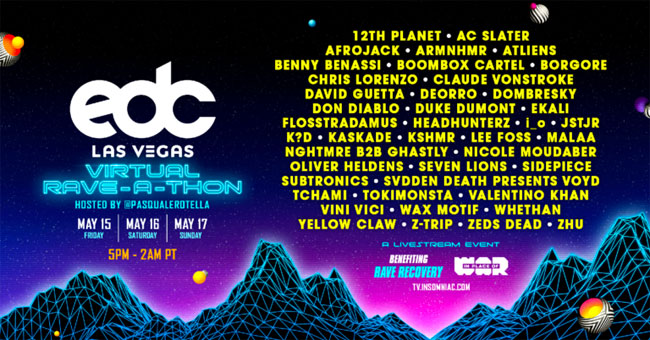 Livestream will benefit Rave Recovery, a relief fund created for dance music fans impacted by the COVID-19 health crisis.
The world’s largest dance music festival, EDC Las Vegas, has announced details for an unprecedented livestream event, set to take place during the festival’s original dates of May 15-17th. Bringing the beloved festival to headliners around the world, the stream will feature multiple stages broadcasting across two unique channels, showcasing exclusive live performances from many artists originally scheduled to perform at EDC Las Vegas 2020. Insomniac Founder Pasquale Rotella will host the event, providing one-on-one interviews with the DJs and engaging with dance music fans online as they stay home and stay safe.

Since the inception of Insomniac’s Virtual Rave-A-Thon series, more than 18 million viewers across 100+ countries have tuned in to the uniquely themed livestreams, with each weekend representing a different festival brand from Insomniac’s vast portfolio of events. Past Rave-A-Thon performances are archived on the Insomniac Events YouTube.

The EDC Las Vegas Virtual Rave-A-Thon also marks the debut of a special initiative to help fans stay positively focused on a future where we can all reunite on the dancefloor. To show gratitude to the dance music community, Insomniac has partnered with charitable organization In Place of War to promote Rave Recovery, a relief fund created specifically for dance music fans impacted by the COVID-19 health crisis.

“Looking out for one another and giving back have been cornerstones of rave culture since people first set foot on the dancefloor,” says Rotella. “With so many people experiencing hardships brought on by COVID-19, those principles are more important than ever. Even though we’re isolated, no one should feel alone. Rave Recovery was created to support fans within our dance music community who need assistance—and hopefully inspire others to reach out, connect, and give back.”

A portion of the proceeds will also support In Place of War’s COVID-19 Emergency Fund, supporting some of the world’s most vulnerable communities in the global south during the pandemic. Like Insomniac, In Place of War believes that music and the arts can bring peace and understanding to the world’s most harshly impacted communities. Donations can be made now via insomniac.com/rave-recovery, and donation links will be live on Insomniac’s YouTube and Twitch channels during the EDC Las Vegas Virtual Rave-A-Thon livestream, scheduled to take place from 5 pm – 2 am PST each of the three days.

Insomniac will continue to release new and original content via its YouTube channel throughout the coming weeks, including new episodes of its Golf Cart Confessions interview series, filmed backstage at various Insomniac festivals in 2019.

Who’s Ready 2 RAVE?!! 😜🌼🔥Your #VirtualRaveAThon Set Times are here!! Keep tagging us & our host @PasqualeRotella in your #MyEDCMoments, Virtual Sky IG Stories & TikTok #RaveChallenges to get featured on this weekend’s LIVESTREAM!!⚡️🌈💻
Tune in at → https://t.co/TYLQSv3iVk pic.twitter.com/MheTLKJcon