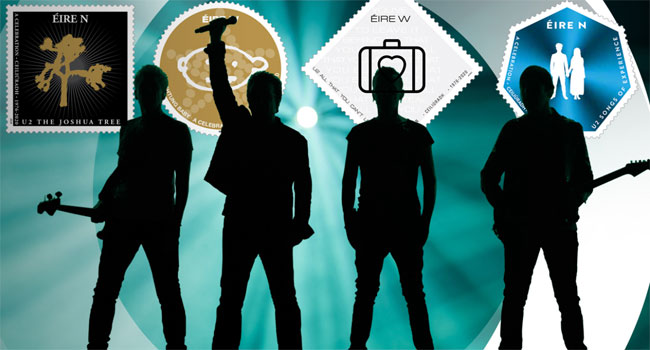 An Post, the Irish postal service, is honoring U2 with special edition collectible stamps. Entitled “U2 – A Celebration 1976-2020,” the four-stamp set represents distinct eras in U2’s musical journey through four of the band’s most memorable albums: The Joshua Tree (1987), Achtung Baby (1991), All That You Can’t Leave Behind (2000), and Songs of Experience (2017). A booklet of four stamps contains two “N” stamps covering standard post within the island of Ireland and two “W” for posting around the world.

A range of specially created stamp collectibles includes a First Day Cover envelope with an early photo (by Colm Henry) of the young Bono, The Edge, Larry Mullen and Adam Clayton performing at Dublin’s legendary Dandelion Market; a Souvenir Sheet featuring a special edition U2 360 Tour “panorama” stamp set within a wider image (by Ralph Larmann) of the iconic stage in London’s Wembley Stadium.

Capturing the career of one of the world’s greatest rock bands on the tiny canvas of a stamp required expert design. With input from the band, An Post worked with U2’s Creative Director Gavin Friday, as well as graphic designer Shaughn McGrath, to develop four concepts inspired by the band’s extensive album catalogue. Each stamp has a different shape and range of print finishes to capture the evolution of the band over four decades.

“In a year with so many restrictions, it’s fun to think that we can travel from our homes in Ireland to anywhere in the world, courtesy of An Post,” says bassist Adam Clayton.

“For fellow lifelong U2 fans and admirers of Irish design, it’s a great pleasure to announce these very special stamps celebrating the remarkable global impact of U2 since their formation in 1976. This stamp issue also acknowledges the band members’ massive impact on global culture and society, from their work on climate change to social justice and more recently, here in Ireland with their response to the nation’s fight against COVID-19,” shares Garrett Bridgeman, MD of An Post Mails & Parcels.

The special U2 stamp booklets and First Day Cover envelopes are available from post offices in Ireland and online at anpost.com/U2. Free shipping is being offered to Irish addresses. All items combined with shipping to the United States averages about $33.

Last week, listeners to BBC Radio 2’s Sounds of the 80s voted The Joshua Tree as the ’80s best record, in a poll marking National Album Day. Written against the backdrop of the Cold War, the album reflected two sides of the American dream, causing the band to toy with album titles such as The Two Americas and Desert Songs before ultimately deciding on its famous title. The album perfectly captured the sacred/secular tension of U2’s landscaped songs and Biblical imagery, sending the group into superstardom with hits like “Where The Streets Have No Name” and “With Or Without You.”

The band is celebrating the 20th anniversary of All That You Can’t Leave Behind with a deluxe reissue on October 30th featuring a remastered 12 track album and 39 additional tracks of B-sides, outtakes and live tracks across five CDs or 11 LPs.

To celebrate the launch of our U2 stamps we have a special U2 collection to give away to five lucky people 🎤 To enter, reply and tell us your all-time favourite U2 song #U2Stamps pic.twitter.com/57tynNK5pG