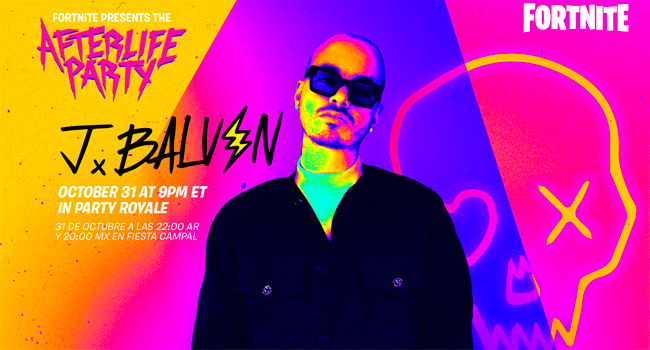 Epic Games has announced that Reggaeton’s Global Ambassador and four-time Latin GRAMMY winner J Balvin will headline this year’s Fortnitemares event at the Afterlife Party. J Balvin will awaken the viewer’s spirit with a special performance in Party Royale featuring his biggest hits and he is inviting SECH to perform their new single “La Luz.”

This unique, one-of-a-kind performance will premiere on Halloween night, Saturday, October 31st at 9 pm ET/6 pm PT. The concert will take place in Fortnite’s Party Royale mode, the game’s no-combat social space where players can get together with friends to catch concerts, watch movies, or just chill. The show acts as a headliner for this year’s Fortnitemares event, an annual game-wide event. Fortnitemares 2020: Midas’ Revenge features new gameplay, challenges, in-game rewards, and more. The concert will also simultaneously premiere in Houseparty, the face-to-face social network owned by Epic Games.

“I am always looking for innovative ways to connect with fans that have been so incredibly supportive of my career and music, as well as gain exposure to future fans,” states J Balvin. “Partnering with Fortnite is an out of this world way to perform a concert in 2020.”

“This show is going to be incredibly special, and nothing like our players have seen so far,” says Nate Nanzer, Head of Global Partnerships at Epic Games. “J Balvin was the perfect partner to work with to create an unforgettable show as his music appeal is boundless. We are honored to work with him and bring his music to fans worldwide.”

J Balvin and Epic Games will be bringing this performance to life using innovative XR (cross reality) technology using LED walls and camera tracking. Fans won’t want to miss this unique performance on the big screen at Party Royale, where Balvin will perform in a completely virtual world created exclusively for this event.

In honor of the show, a new nightlife take on a Fortnite favorite, the Party Trooper Outfit, is available in the Item Shop now all the way through November 1st at 8 pm ET. All Party Trooper owners that attend the Afterlife Party in Fortnite will unlock the exclusive J Balvin style for the outfit.

Fortnite is available as a free download on PlayStation 4, Xbox One, Switch, PC, and Android via fortnite.com.