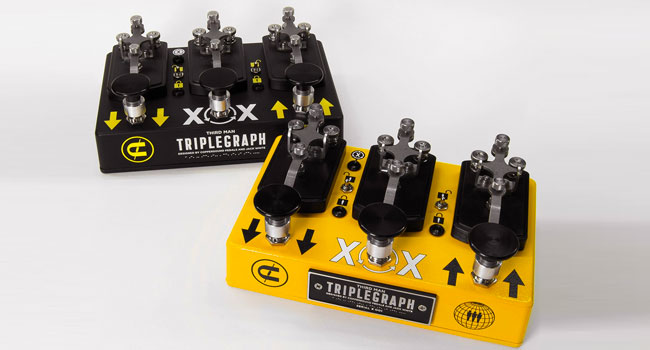 The Third Man Triplegraph pedal was years in the making

Coppersound Pedals and Jack White announce the Third Man Triplegraph digital octave pedal. The pedal is over four years in the making, with prototypes road tested by White himself during the recording and touring of The Raconteurs’ Help Us Stranger.

The Triplegraph’s innovative design features three proprietary Morse-code telegraph keys and an integrated auxiliary loop. Using a high-power DSP Blackfin Processor, Triplegraph triggers an octave down with the left key, octave up with the right key, while the middle key activates a killswitch or auxiliary loop.

The Limited Edition model — limited to only 100 units constructed — comes with an exclusive yellow finish, black and white print, a custom steel machined serial badge plate, a Certificate of Authenticity signed by White himself, and a custom designed book, all elegantly packed in a special edition box. The Standard Edition is finished in a sharp, matte black finish with yellow and white print, packed in a standard box. Both models come with a custom designed 130+ page book that documents the origin story of this innovative pedal.

The collaboration was born after CopperSound Pedals optimistically dropped off a custom, one-of-a-kind Telegraph Stutter — a momentary killswitch pedal — for White at Third Man Records’ headquarters in 2016, hoping that he would receive it as a gift. Within the hour, CopperSound received a call from Third Man staff saying that White had not only received the pedal, but saw even greater potential for it and had mocked up an idea for an expanded version featuring not one, but three keys: octave up, octave down, and momentary killswitch.

In Kill mode, the middle key acts as a momentary killswitch, allowing the player to remove their dry signal and attain a fully wet octave up and/or down when used in conjunction with the octave keys. In Auxiliary mode, the player can connect one or more of their favorite effects in parallel with the octaves via the send/return jacks, and trigger them in momentary bursts. The high and low octaves can be triggered in parallel with the dry signal when the octave keys are pressed independently. The octaves themselves track seamlessly with zero latency, and can be triggered in latching or momentary modes, using our “Loctave” toggle switches. The telegraph keys themselves are composed of custom stainless steel and aluminum components, making them indestructible and exceedingly durable for both hand and foot operation.

The result of four years of rigorous ideating, concepting, breadboarding, testing, designing proprietary hardware, testing, retesting, testing again, and ultimately manufacturing is the best-sounding clean octave pedal ever stomped, capable of standing its own against industry standards and unleashing a formidable new set of sonic possibilities to pedal boards.

Originally intending to teach himself a new skill and build a few custom pedals he couldn’t find at the local Guitar Center, Alex Guaraldi began CopperSound quite by accident in 2014 just outside Boston in Easton, Massachusetts. Upon hearing of Guaraldi’s tinkering, requests from friends and colleagues for custom builds began pouring in, and it was clear that there was a mandate for CopperSound Pedals to be more than just an occasional hobby. Guaraldi joined forces with co-founders Jordan Collins as design director, Tris Coffin as dealer relations, as well as lead builder Oliver Brennan and turned his garage into a global headquarters for the boutique brand to serve up the sounds. With every pedal made meticulously by hand and a growing list of stockists all around the globe, CopperSound is committed to testing the limits of sonic manipulation in this golden age of gear and inspiring musicians to explore new aural horizons.