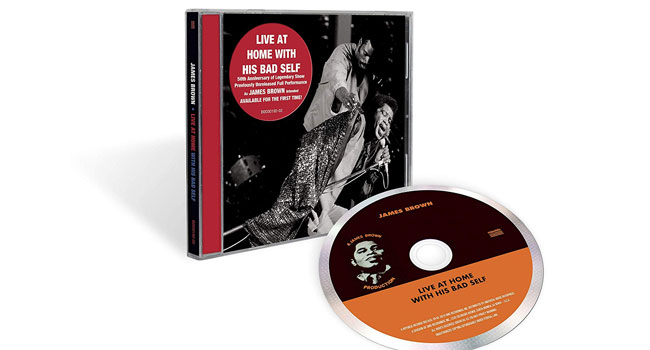 James Brown: Live at Home With His Bad Self will be released Oct 25th via Republic/UMe

The 50th anniversary of James Brown’s October 1, 1969 homecoming concert in Augusta, Georgia, will be celebrated with the first-ever release of the complete show, newly mixed and including seven never-before-issued performances. James Brown: Live at Home With His Bad Self will be available on CD, 2 LP vinyl and digital audio on October 25th by Republic/UMe.

James Brown’s roof-raising performance at the city’s Bell Auditorium was captured on tape, with the intent to make an album of the show the cornerstone of a move back to his Augusta roots. Live at Home with His Bad Self was scheduled as a 1969 holiday release. But Brown and his band, featuring saxophone legend Maceo Parker and three legendary drummers – Maceo’s brother Melvin, Jabo Starks, Clyde Stubblefield, together for this tour only – soon broke up. Soul Brother No. 1 called in a new, young group, featuring bassist Bootsy Collins, and within a few weeks they recorded the funk anthem “Sex Machine.” With the single flying up the charts and no full-length to promote with it, Brown shelved the planned Live at Home album. He instead produced Sex Machine, a 2 LP set released in 1970 that included a portion of the Augusta show.

Now, finally, as James Brown intended: the full Augusta homecoming show with his celebrated 1960’s band. Live at Home with His Bad Self is newly mixed from the original analog multi-tracks by Peter A. Barker, whose credits include mixes of live recordings by Jeff Beck, Bonnie Raitt, Babyface, and more. The album’s seven previously unreleased performances include two instrumentals, “Lowdown Popcorn” and “Spinning Wheel,” which were re-cut with canned applause for the Sex Machine release. Also included is Brown’s then-current hit, “World,” performed at the concert with a live vocal over a tape of the studio recording’s instrumental arrangement, an unusual move which Brown explains to the audience, while “There Was A Time” and “Mother Popcorn,” originally heavily edited on Sex Machine, are doubled in length. Other highlights include an actual live rendition of “Give It Up Or Turnit A Loose,” Brown’s influential hit from 1968, a title fans will note appears on the Sex Machine album, but may not be aware that version is a studio re-record.

The CD and 2 LP vinyl packages include an essay by Alan Leeds, the GRAMMY-winning former James Brown tour manager and publicist who is also the album’s co-producer.

* Previously Unreleased/All other performances, though previously issued in some form, are presented in new mixes, including: ** Extended from track’s original release.