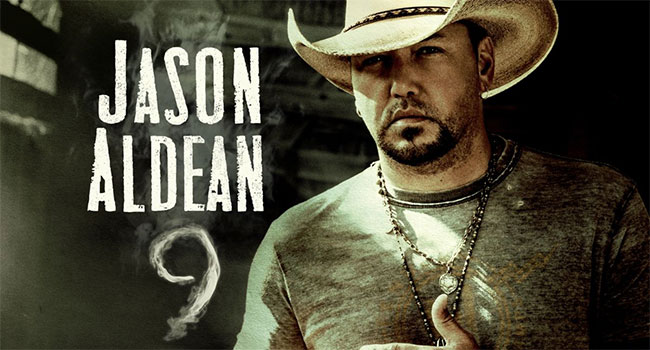 Jason Aldean has followed his own time-tested formula for over a decade and he’s not one to second guess that as he reveals more details behind his next effort 9 (Macon Music/Broken Bow Records), to be released November 22nd. Aldean offers 16 interwoven tracks in an era of stand-alone singles and superstar EPs, holding his ground for the modern album with an old school soul. It’s packed with the kind of blistering stadium anthems and cross-pollinated convention busters his audience has come to know and love, all rooted in the obvious traditional influence Aldean has carried throughout his career. Fans have access to another new track, “Dirt We Were Raised On,” along with the four previously released songs off the upcoming album, including its lead single “We Back,” with all pre-orders.

“People buy albums with eight songs for ten bucks now, but with 9 it’s like you’re getting two whole albums at once,” Aldean says in a press release. “I want fans to feel like they’re getting more than they bargained for and I want it to be something they listen to from top to bottom, and never hit skip…or thumbs down or whatever.”

For 9, Aldean’s ninth studio project, the multi-platinum artist’s drive to push his creative envelope is still there and his preference for long-playing albums leaves plenty of opportunity. The songs themselves lead the way as so much of 9‘s sound goes back to longtime songwriting contributors like Neil Thrasher, Josh Thompson, Brantley Gilbert and Florida Georgia Line’s Tyler Hubbard, among others. The rest reveals itself in the studio, with Aldean directing traffic alongside producer Michael Knox – Nashville outliers who insist on recording with his touring players.

Aldean taps the spirit of the classic country drinking song, infused as always with a not-so-classic splash of swagger. “Came Here to Drink” rolls in with the ease of a why-not weeknight buzz, while “I Don’t Drink Anymore” serves a 100-proof hook. “Tattoos and Tequila” charges in like a shot in the dark, and “Blame It on You” sways with a half-drunk realization that we make our own problems.

“I don’t know. Maybe I’m just drawn to drinking tunes,” Aldean says of the boozy track ratio. “They just go together with Country music and it’s hard to pass them up. But it’s not the ‘Hicktown’ type stuff with keg stands, it’s more like sitting at the bar and doing some thinking. It’s all coming from a more mature standpoint.”

Even with the maturity, Aldean’s penchant for risk taking remains. Steamy R&B standouts like “Got What I Got” build off the heat of platinum hits like “You Make It Easy.” The deadly electro-country ballad “Cowboy Killer” joins arm in arm with the brotherhood-building “The Same Way” – a chest-thumping reach across demographic divides ready to rock stadiums across the nation – and “Some Things You Don’t Forget” sets its heart-pounding hooks free into the indie-pop stratosphere. But Aldean’s careful not to trade timeless appeal – or creative independence – for a passing fad. Still, hard working heartland anthems have always been at the core of Aldean’s story – and he includes a few instant classics on 9. “Camouflage Hat” feels as broken in as its title suggests, a slow-rolling tribute to so many rural romances. The quick talking “Keeping It Small Town” reminds that well-lived lives don’t have to be complicated, while “Dirt We Were Raised On” and “Talk About Georgia” show the deep well of pride Aldean still holds for his Macon roots.