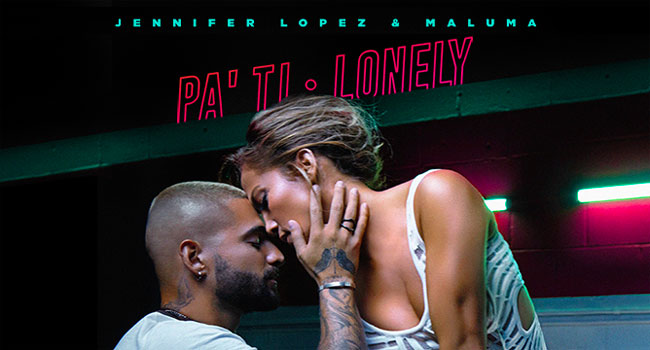 Making a major splash, Jennifer Lopez and Maluma have lit up pop culture and streaming platforms with their two new singles and epic music video event for new music, “Pa’ Ti” and “Lonely.” These two-part music video has amassed an impressive 18.5 million views on YouTube in just one week since release. Both tracks are available digitally via Sony Music Latin and Arista Records.

Together, they joined forces with TikTok for a groundbreaking exclusive “Behind the Video” premiere event. Broadcast on TikTok Live, the behind-the-video event treated fans to a making-of featurette for the “Pa’ Ti”/“Lonely” music video, before exclusively premiering the video directly on the TikTok app. Impressively, the event drew an audience of 421K global unique viewers with 51K peak concurrent viewers. Meanwhile, it inspired 32K video creates to “Pa’ Ti,” and the #PaTiChallenge generated over 1.5 billion views. JLo gathered 255K new TikTok followers as videos on her @JLo account attracted 21 million views.

Additionally, JLo scored her career-best 24-hour Spotify debut, posting up 890K streams on the platform. On the iTunes Top Latino Songs Chart, she and Maluma captured the Top 3 spots with “Pa’ Ti” at No. 1, “Lonely” at No. 2, and “Pa’ Ti [Spanglish]” at No. 3 for three days. Showing no signs of stopping or slowing down, “Pa’ Ti” remains at the Top the chart. Not to mention, “Pa’ Ti” became “the greatest gainer this week” at No. 22 on the Billboard Latino Radio Chart.

“Pa’ Ti” and “Lonely” were produced by Jon Leone and Édgar Barrera and co-written by Jennifer Lopez and Maluma. The music video was directed by Jessy Terrero and filmed in Huntington, NY and New York City. The songs will also notably feature in Universal Pictures’ Marry Me, which co-stars Jennifer Lopez and Maluma and opens in theaters everywhere this Valentine’s Day weekend, February 12, 2021.

Both songs will also be included on the Marry Me Original Motion Picture Soundtrack released via Sony Music Latin and Arista Records to be announced soon.

Two of the hottest superstars in the world have delivered the biggest and boldest blockbuster collaboration of the year with “Pa’ Ti” and “Lonely.”

More big news and surprises will be announced soon.