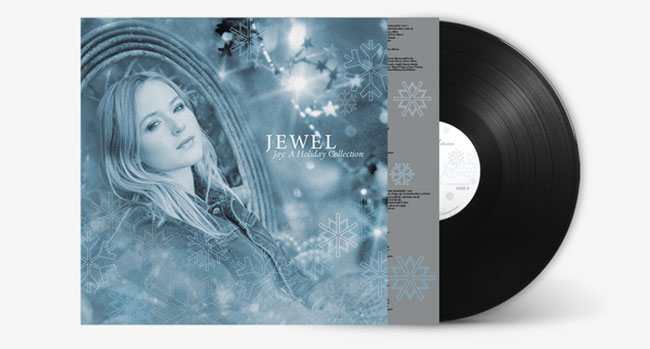 Craft Recordings is pleased to announce a vinyl reissue of Joy: A Holiday Collection from award-winning singer-songwriter Jewel. In stores October 18th, the best-selling title features beloved holiday classics as well as festive, original compositions. The album has been remastered by George Horn and Anne-Marie Suenram at Fantasy Studios and manufactured at Memphis Record Pressing. This reissue marks the very first vinyl availability of the title, which was originally released in 1999. A metallic silver vinyl edition is also available exclusively via Barnes and Noble.

Joy: A Holiday Collection marked the first outing of yuletide music from Jewel, who had skyrocketed to fame following the release of her first two albums (1995’s Pieces of You and 1998’s Spirit). Jewel worked with producers Arif Mardin (Carly Simon, David Bowie, Diana Ross) and Joe Mardin (Queen Latifah, Bette Midler) to record 13 lushly arranged songs. Backed by a choir (which includes such esteemed singers as Vaneese Thomas, James “D-Train” Williams and Janice Pendarvis), the singer’s distinctive vocals and versatile range shine as she performs holiday favorites like “Winter Wonderland,” “Joy to the World,” “Ave Maria,” “Rudolph the Red-Nosed Reindeer” and “O Holy Night.” She also sings several original tracks, including “Face of Love,” “Gloria” and a Christmas version of her 1998 hit single, “Hands.” Impressively, just one month after its November 1999 release date, the album was certified platinum, peaking at No. 2 on the Billboard Holiday Albums chart and No. 32 on the Billboard Top 200.