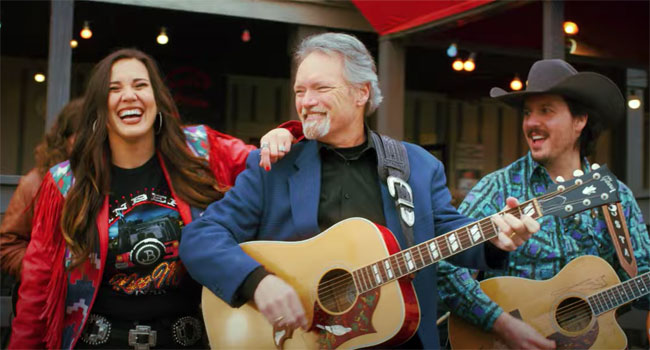 Video filmed outside of The Nashville Palace

Nineties country star John Berry was honored to be featured in the new music project “Give Me Back The 90’s” by country music’s hot new duo, Joe & Martina. His contribution included vocals on the single and showcased in the video which was exclusively premiered by Billboard for the official music video release Friday (April 24th).

The single debuted on Music Row Country Breakout Chart at No. 70 and has climbed to No. 53 followed by a No. 16 chart position on the CDX True Indie Chart — a tremendous feat for an independent act.

“From the very outset I could tell Joe & Martina had something special to offer country music,” states Berry. “In writing their own songs, they are able to convey their unique style and personalities in a way that keeps the music true to who they are. I was absolutely taken back that they had included ME as a 90’s artist that had influenced them to pursue their dreams. It is quite humbling and I thank Joe & Martina for the privilege of singing on what I know is a hit.”

Filmed almost entirely at The Nashville Palace, the music video was directed and produced by Just Produce Hy Def (Justin Hoskins and Steven Webster), who sculpted Joe & Martina’s re-enactment of classic 90’s country music videos peppered in between performance shots and John Berry’s climatic entrance. While clad in Mo Betta shirts, the duo captures the essence of classic scenes with their own touch beginning with Alan Jackson’s “Chattahoochee,” Jo Dee Messina’s “Bye Bye,” and a tip of the hat to George Strait’s Pure Country film trilogy.

With a platinum hit under his belt as a co-writer on Luke Combs’ “Don’t Tempt Me,” Joe joined forces with frequent collaborators singer-songwriter Dustin Huff and producer Johnny Garcia to pen “Give Me Back the 90’s,” before adding Martina’s warm harmonies in their home recording studio. The song came together almost effortlessly as the lyrics reminisce about life before the digital age along with the strategic name placement of 90’s country artists.

“Martina and I are hardcore country music fans first and foremost, so intentionally nodding our hats to George Strait, Trisha Yearwood, Wynonna and of course, John Berry, was nothing but an act of love for some of the artists who truly shaped us as musicians and established our life soundtrack,” Joe shares. “‘Give Me Back the 90’s’ is the desire to go back to the world I grew up in, its simplicity and the music.”

“This song truly represents us and the foundation we were raised on, what influenced us and the way our hearts beat for country music,” adds Martina. “I had a poster of John Berry on my wall as a kid, so having John record and appear in our music video, sharing his talent and soul, will forever remain a pinch-me moment. I grew up watching 90’s country music videos, so to bring my own version to life is one of my greatest accomplishments. We got to dance around our favorite honky tonk, dressed in the very best western fashion with John Berry… the coolest!”

“Give Me Back the 90’s” is available on digital formats for streaming and download.

John Berry talks about the single on The Music Universe Podcast. Joe & Martina will appear on an upcoming episode airing later this spring.