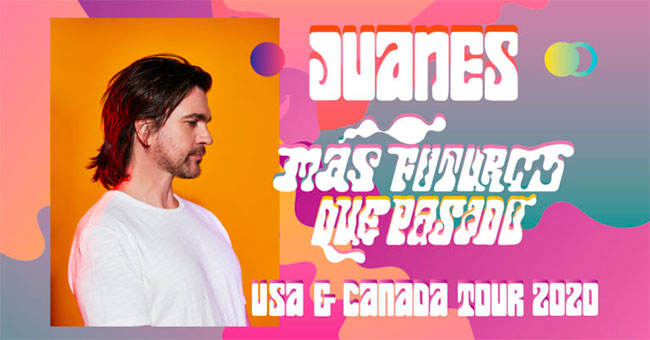 Latin rock icon and multiple Grammy award-winning artist Juanes announced his 2020 North American Mas Futuro Que Pasado Tour – an up close and immersive journey through all the greatest hits of his past, combined with the future looking guitar interpretations of Latin America’s most beloved rhythms found on his new album – for which the tour is named. Produced by Live Nation, the extensive 40+ date North American trek will kick off April 14th in Indianapolis, IN and make stops in New York, Toronto, Atlanta, Chicago and more, before wrapping October 25th in Temecula, CA.

Tickets will go on sale to the general public beginning Friday, February 7th at 10 am local time at ticketmaster.com. Citi is the official presale credit card of the Mas Futuro Que Pasado Tour. As such, Citi cardmembers will have access to purchase presale tickets beginning Tuesday, February 4th at noon local time until Thursday, February 6th at 10 pm local time through Citi Entertainment.

A multiple Grammy and all-time leading solo Latin Grammy winner (with 23), Colombian superstar Juanes is Latin Rock’s leading global ambassador. Juanes has sold millions of albums around world, while notching 12 No. 1 singles and continually opening doors for the global growth of contemporary Spanish language music. Juanes is the only artist holding two of Billboard’s “Top 5 Latin Pop Songs of All-Time” – while Rolling Stone praised his 2017 groundbreaking Mis Planes Son Amarte with a rare five-star review – declaring: “on the stunner of a visual album he cares about creating timeless songs [with] meticulous craftsmanship in every note.”

With his most recent Más Futuro Que Pasado album (2019), Juanes has provided his most immersive and forward looking fusions yet of traditional and contemporary guitar, to create a 21st century take on Cumbia, Guasca, Vallenato and more folkloric styles. The end of 2019 saw continued high critical praise for the new album: “a hooky, rhythm-heavy study in why Juanes remains a prime mover in Latin popular music. …a soulful celebration of the Latin folk tradition” – while Juanes was also honored as “The 2019 Latin Recording Academy Person Of The Year” recognizing his “creative artistry, unprecedented humanitarian efforts, support for rising artists, and philanthropic contributions to the world”