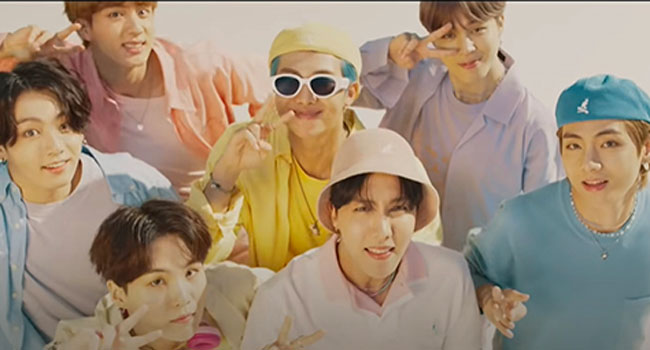 All proceeds benefit MusiCares, a partner of the Recording Academy

To launch the initiative, RM, Jin, SUGA, j-hope, Jimin, V, and Jung Kook — also known to the world as the global music phenomenon, BTS — have generously offered a group of their pastel colored ensembles worn in their 2020 music video for “Dynamite,” the global superstars’ smash hit which debuted No. 1 on Billboard Hot 100. The official music video for “Dynamite” released on August 21st has set new records on YouTube for the most views for a music video in 24 hours and the biggest music video premiere with over three million peak concurrent viewers.

BTS Army, their dedicated fan base of millions across the globe, will recognize these ensembles from the music video’s memorable final dance sequence where each member wore a specific pastel color.

These are the first costumes ever to be offered at auction from the seven member South Korean boy band, the first group since the Beatles (in 1995-1996) to earn three No. 1s on the Billboard 200 in less than a year.

In 2019, BTS had the sixth highest grossing tour, surpassing Ariana Grande and Paul McCartney, and won “Tour of the Year” at the 2019 American Music Awards. 2020 was a record-breaking year for BTS with the releases of their albums Be, (featuring their first all English and No. 1 U.S. hit single, “Dynamite”) their second hit album this year following the chart-topping success of Map of the Soul: 7.

BTS won four categories at MTV Video Music Awards including “Best Pop” and “Best Group.” BTS also got nominated in the “Best Pop Duo/Group Performance” for the 63rd GRAMMY Awards. This group of ensembles will be sold at no reserve with a conservative pre-auction estimate at $20,000 – $40,000.

“Julien’s Auctions is proud to partner with MusiCares on this annual online charity auction that now-more than ever-is needed to help the devastated music community,” states Darren Julien, President/Chief Executive Officer of Julien’s Auctions. “We can’t think of a better way to highlight the work of MusiCares than with this ‘Dynamite’ contribution from BTS, whose groundbreaking music and uplifting messages of hope and optimism are what the world needs now. We thank BTS for their generous donation of their special one of a kind items whose proceeds will benefit this most urgent initiative.”

The world record-breaking auction house to the stars will host the special live and online auction during GRAMMY Week 2021. The auction will start closing in real time and in lot order for live bidding at 10 am PT on January 29th. More items offered by celebrities, artists and entertainers to the auction will be announced in the coming weeks.